“I am a European” 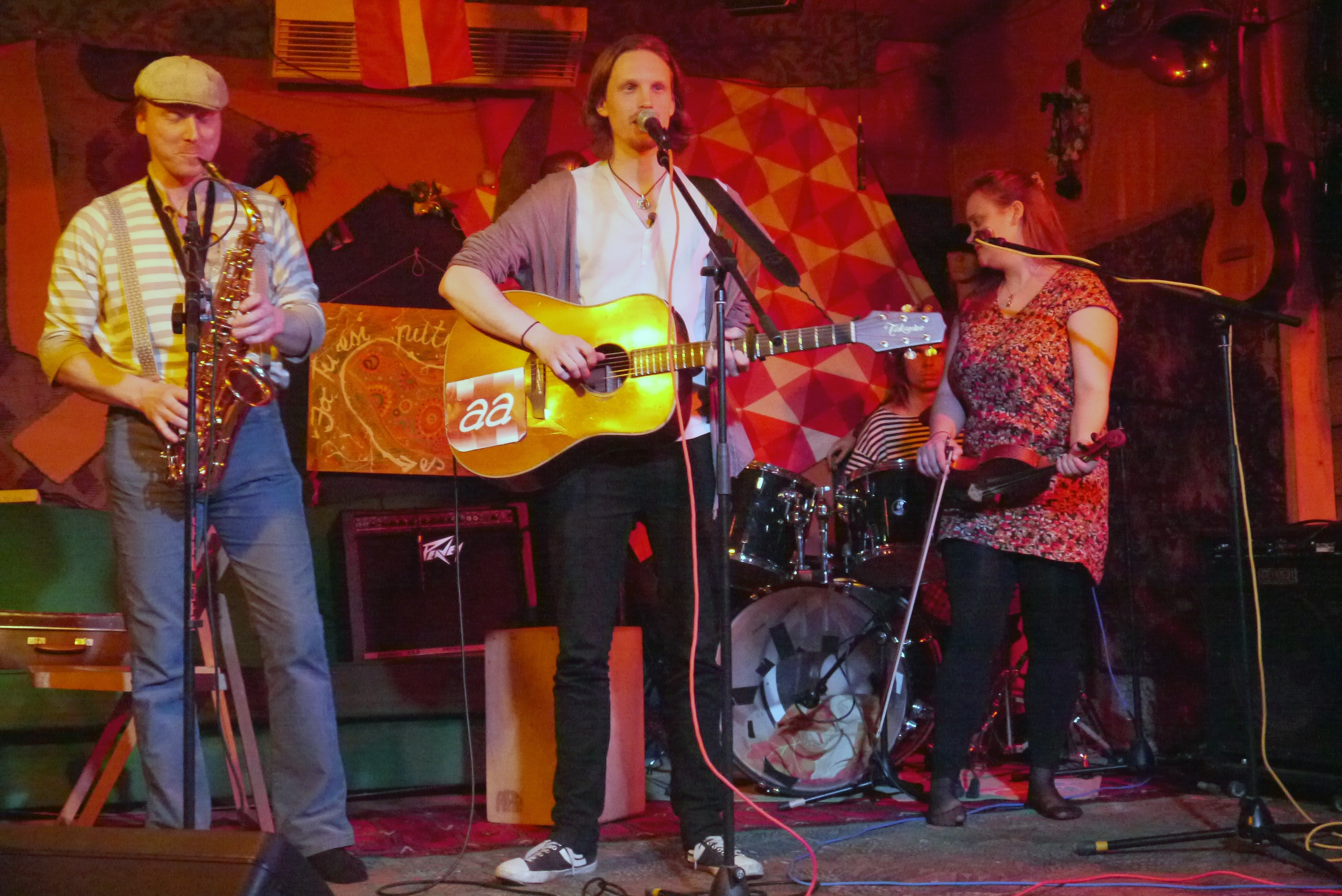 He is German, but sings for Latvia. He speaks fluent Latvian, Dutch, Danish and a variety of other languages. Jöran Steinhauer (27) says  about himself that he is first and foremost European. With his band Aarzemnieki, Jöran represents Latvia at this year’s Eurovision Song Contest.

RIGA – A small room in an empty house in central Riga. About 20 people lie on mattresses, pillows and a few decrepit sofas. Spotlights and UV tubes are the only sources of light. A stage is set up on one end of the narrow room. Four young people are on that stage: a girl with a violin, a drummer, a pianist and a young man with a guitar.

Together, they form the band Aarzemnieki, which won the national pre-selection for this year’s Eurovision Song Contest (ESC) in Latvia. “Aarzemnieki is Latvian and means foreigner,” explains Jöran Steinhauer, founder and frontman of the band. As a German, he is the only foreigner in the band. The other three members – Katrina Dimanta (violin), Guntis Veilands (piano and saxophone) and Raitis Vilumovs (drums) – are Latvians.

English for the Eurovision

Listening to the songs Jöran writes for Aarzemnieki, this however doesn’t stand out. Most of the lyrics are in Latvian – with only one exception: The ESC-song “Cake to bake” is in English. Jöran wrote the song specifically for the contest. “For the Eurovision Song Contest, you have to watch out that you don’t ask too much of the audience. So you shouldn’t sing in your own language because nobody is able to understand that,” he explains. “That is why we sing a song about a cake, in English. People can understand that and they can sing along.”

Nevertheless, Jöran thinks that the ESC is an opportunity to present one’s own language to other Europeans. Therefore, the chorus of Aarzemnieki’s ESC-song contains a line in Latvian: “Cep, cep kuku” can be translated to “bake a cake”. “I have always found the European idea exciting and interesting,” says Jöran. “It is something that should be kept track of.”

As most of Jöran’s songs, “Cake to bake” also has a deeper meaning: “It is about realizing and admitting one’s weaknesses. There are enough people that are willing to help you if you ask,” says Jöran. “That is what society is based on. In Germany, it doesn’t always work. But here in Latvia, I feel it a lot.”

Most of Jöran’s songs are about his own experiences in Latvia and with the Latvian language. One song for instance is called “Blodina”. It means “little bowl” and is Jöran’s favourite word in Latvian. Indeed, he has a special relation to Latvia – and starting point for this was the ESC.

“I have always been interested in music, and in foreign languages. Then in 2000, I watched the Eurovision, and Latvia came third with a band called ‘Brainstorm‘. After, I went to the shop and bought two of their CDs. That is how my relation to Latvia started.”

In 2005, Jöran went on a student exchange to Latvia. After school, he came back and spent one year there to do his community service. During that year, he learnt to speak Latvian. Yet it took him a few more years to finally start writing songs in Latvian. “I had the idea of writing a Latvian song earlier. But I only had nerve enough to do so last summer.”

One of the first songs he wrote was a farewell for the lat, the former national currency of Latvia that was replaced by the euro on 1 January 2014. “The song got really famous overnight. Latvians just started to share the youtube video.”

That is why Jöran decided to come back to Latvia – and stay. Since last year, he has been living in Riga again. There, he also found the other three band members. “We started to establish ourselves as a group, played in cultural centres and so on. And then we decided to participate in the pre-selection for the Eurovision. And we won!”

Hopes for entering the final

On 6 May, Aarzemnieki will participate in the first semifinal in Copenhagen, together with Albania, Armenia, Azerbaijan, Belgium, Estonia, Hungary, Iceland, Moldova, Montenegro, Portugal, Russia, San Marino, Sweden, The Netherlands and Ukraine.

“It is great to take part,“ says Jöran. “But of course, it would be amazing to participate in the final. Latvia is a nation of great singers. It is sad that it hasn’t managed to enter the final for five years now.”

That he came upon Latvia through the ESC and now represents the country himself is like coming full-circle for Jöran. “I would really like this fairy tale to come to a good end, and to be rewarded.” That he is not Latvian is not important. “To participate for Latvia in the ESC, I just needed a residence permit. Also for me, my nationality doesn’t really matter. I am a European. Of course, I am shaped by where I grew up and by my language. And from this perspective, I am German. But I made so many great experiences here in Latvia. That connects.”

Jöran also has a special connection to Denmark, the venue of this year’s ESC. “Once, I worked on a farm in Denmark for three months. There, I learned to sing a few songs in Danish. I am really looking forward to singing them again, together with the Danes.”

Before going to Denmark, Aarzemnieki will give two pre-Eurovision concerts, one in Amsterdam (5 April) and one in London (12 April). The first semifinal of the ESC will take place in Copenhagen on 6 May, the final on 10 May.