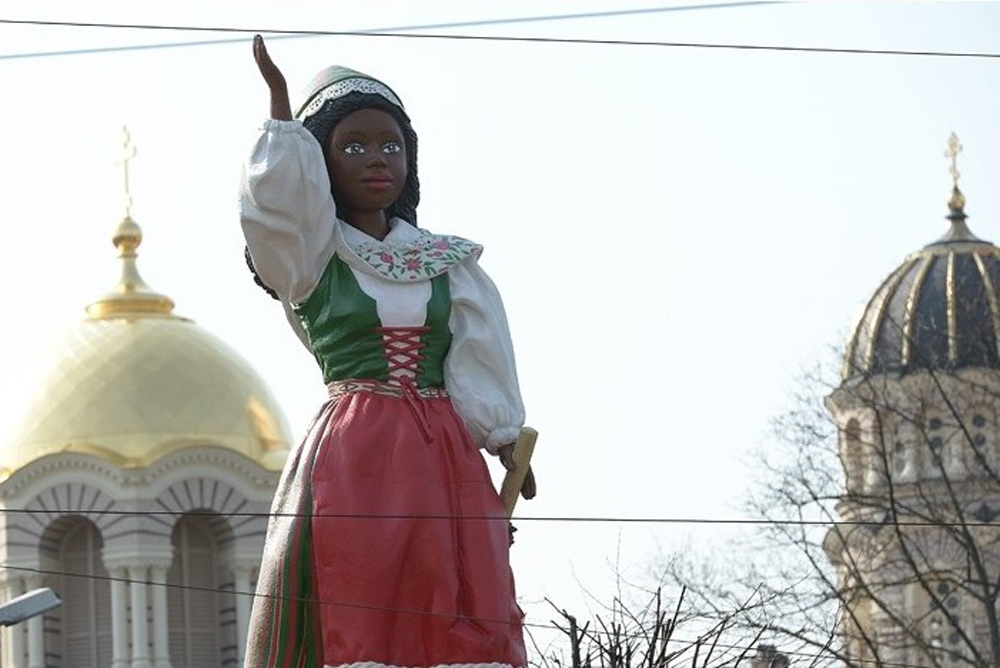 Latvia’s biggest city is one of the two European Capitals of Culture 2014. Although Riga is little accustomed to the spotlight, it has a lot to tell. Through the new exhibition “Monument Wars”, the city draws attention to its complex past – still alive in the Riga of today.

RIGA – From this month onwards, Riga is highlighting its history through an exhibition called “Monument Wars”, situated at the cross-road of Freedom Street (Brivibas Bulvaris) and Elizabetes Iela – at the place where Lenin’s monument was located. One can see emerging every few minutes from a huge dark box four figures symbolizing the powers that influenced Latvia’s history and culture over the years. The Virgin Mary symbolises Poland, the black Barbie dressed up as a Swedish maiden stands for Sweden, the sculpture of Emperor William I represents Germany, and the Soviet period is shown through a copy of Gustabs Klucis’ drawing. A pedestal allows people to climb up and thus to be part of the monument.

“This installation gives us a good opportunity to remember what a rich heritage we have,” said the artist Aigars Bilše to Riga2014.org.

This rich heritage comes from both a complicated and fascinating history, which has left traces in the Riga of today. The road leading to the Freedom Monument and the Monument Wars is one of the prominent examples. It represents Latvia’s occupations by the Polish-Lithuanian Commonwealth, Sweden, Germany and the USSR. Successively called Alexander, Hitler and Lenin, it is now named Freedom Boulevard, as a symbol of the independence declared in 1991.

“Culture is a force you can’t resist”

The “Monument Wars” is part of “Freedom Street”, one of the six chapters that the programme of Riga European Capital of Culture 2014 embraces. It is focused on Latvia’s relationship to the war and mark 100 years since the beginning of the World War I. It includes both regret and commemoration, truce and forgiveness – in the form of culture.

With the motto “Force Majeure”, the programme of Riga 2014 “aims to reinforce the conviction that culture is a force you can’t resist, which changes something inside of people and in the city,” said Anna Muhka, in charge of the international communications. “We want to show that Riga has much more to offer than the Old Town and the Art Nouveau district. It is not only a city for grandparents and parents. This is also a place for young people, because they can afford it.”

Despite Riga’s designation as most hipster neighbourhoods in the world and an Historic Centre part of UNESCO World Heritage, the capital isn’t the favourite of the European tourists. The main challenge is now to attract more tourists, cultural centred and able to stay longer than a weekend. Without becoming an expensive, commercial and crowded place.

“Monument Wars” is installed until November 30, 2014. Click here to see what is happening this month.