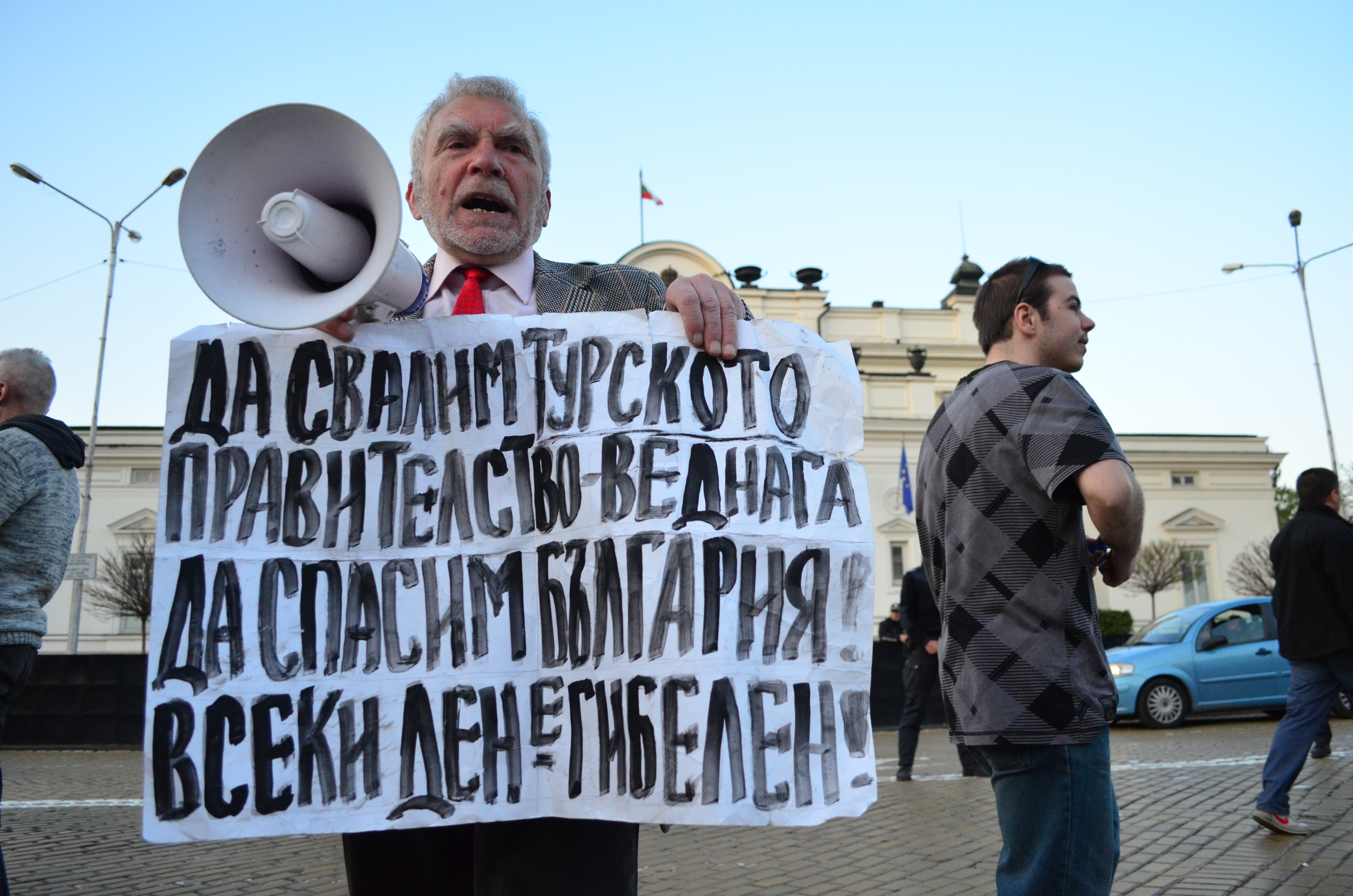 What started as a protest against the nomination of Delyan Peevski as head of the national security agency has since evolved into a demonstration calling for the mass resignation of the current Bulgarian government.

SOFIA – On April 9, hundreds of protesters gathered in front of the parliament building; same place, same time as they had been for 300 days.

When Delyan Peevski, a media mogul and Bulgarian businessman, was put forward as a potential head of the national security agency, despite having no prior experience in an area related to the security sector, people were enraged and took to the streets.

While Peevski has had his name withdrawn for the position (he now seeks a seat in the European Parliament) the protest has since evolved into something much more.

“[Peevski’s nomination] was the trigger, but it was not the reason [for the protest],” says Evgeniy Kandilarov, Professor of Modern History at Sofia University and member of the Centre for Historical and Political Studies think tank.

Protesters themselves cited everything from smoking laws in doors to widespread elective corruption as reasons for their demonstrations.

Kandilarov explains that the parties in power now – an unofficial coalition of the Bulgarian Socialist Party (centre-left), the Movement for Rights and Freedom (centre) and Ataka (nationalist) – are similar to the last government, which also faced strong protests and resigned as a result.

“They ruled with a very strong hand,” he said of the last government, “very right wing. Financial policy was very strict.”

All these political scandals have led the people to believe that the government is a kind of “mafia”, says Kandilarov. This caused mass demonstrations that lead to a new election, however one that is also mired in controversy, with the majority party Citizens for European Development of Bulgaria calling for yet another re-election.

“People protesting just to change something”

Kandilarov has said, while at times effective, the protest is not seeing major progress despite the 300 days of rallying.

He points to the lack of central leadership and proposal of viable solutions to the governments as key hindrances to the political change that so many of the protesters are fighting for.

“Most [protesters] don’t really know what they want,” he said, “[they] want the government to resign, but what is your alternative?”

Some have proposed a stronger executive branch of the government while others want whole new parties, rather than the same four or so who always seem to come into power in every election, but Kadilarov said that there are no leaders or faces of the protest to guide it.

Demonstrators march towards the parliament building.
Photo by: Paul Burgaud

The protests, while numerous in participants, have never manifested as a political force as many do not see any alternatives when voting, Kandilarov explained. Many also see politics as something “dirty” rather than an avenue for change.

“They were feeling it’s time for them to be active, but with no idea of what they wanted to achieve. What is their final aim?”

The protest even spread to the University of Sofia, which was shut down for several weeks earlier in the school year. An ‘Occupy’ movement began there and some of the protesters were Kandilarov’s own students.

“They were just against policy and against politics,” he said of the protesters, “It was like [taking hostage] of an institution that is by definition not a political institution.”

This follows the narrative of a people disillusioned with politics, but with the belief that there is no way to shift the paradigm through the traditional means and power structure currently in place in Bulgaria.