Russian speakers protest in Riga for preservation of their language 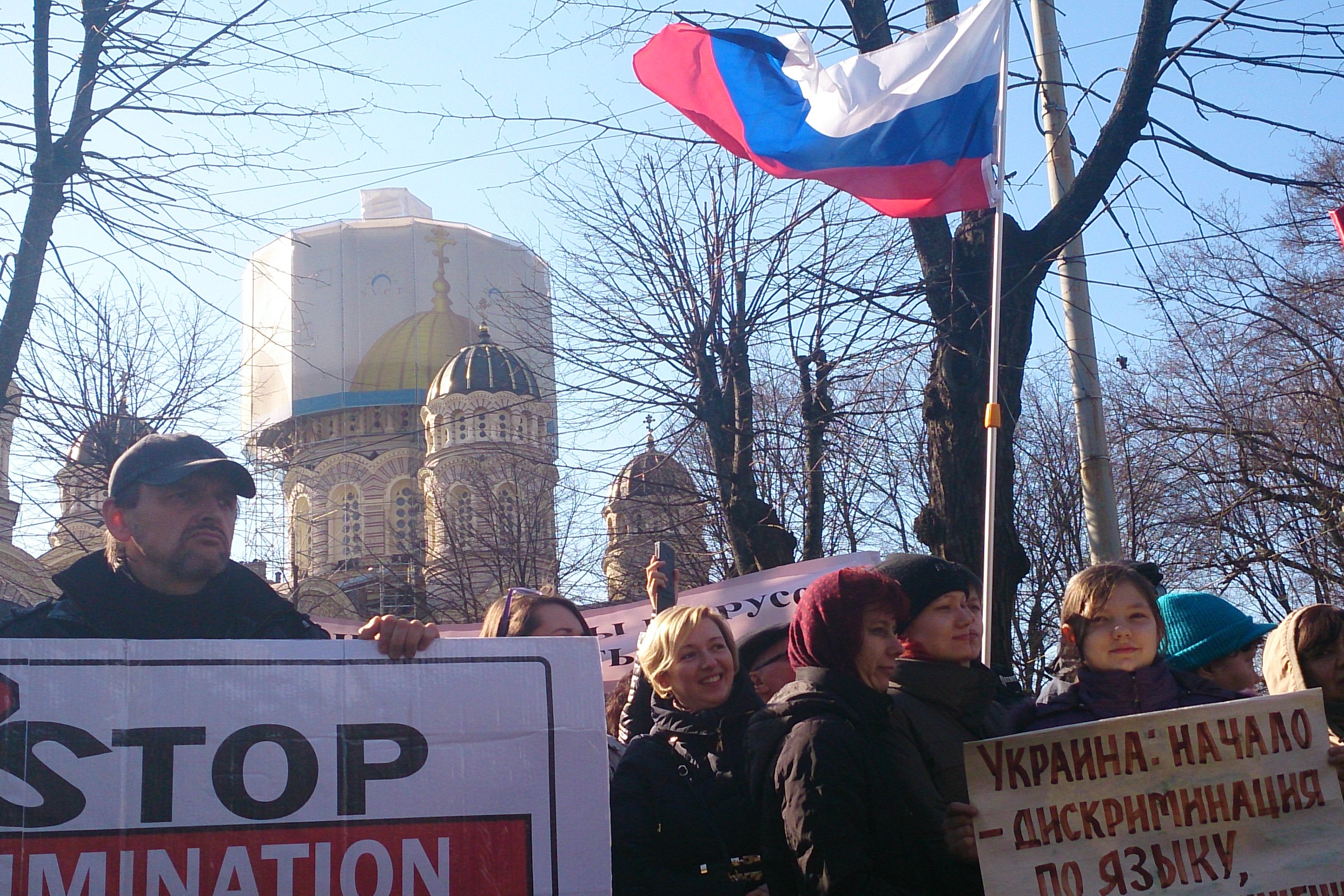 About 150 Russian speakers protested on Thursday in Riga for the preservation of Russian language schools. The protesters gathered in front of the Cabinet of Ministers on Brivibas Bulvaris (Freedom street) and marched to the Ministry of Education.

RIGA – Some protesters are holding placards stating “Hands off Russian schools”, “Russia do not surrender” and “We want to receive education in our native language.” Others march to the Ministry waving a Russian flag. One young girl is even holding a banner with the text “Ukraine; started language discrimination, the result – a merger with Russia.”

The protest is supported by Tatjana Zdanoka, from the Latvian Russian Alliance party (former party For Human Rights in United Latvia), who is a member of the European Parliament (MEP) for the Greens/EFA. Currently she is under an investigation by the Latvian security authorities as she is accused of being a Russian agent of influence in Latvia and the European Parliament.

Tatjana Zdanoka, MEP and leader of the Latvian Russian Alliance, is currently under ivestigation for allegations of being a Russian agent of influence in Latvia. Photo by Steven Musch

In an interview with Euroviews, Zdanoka says: “The government tries to abolish Russian language schools. And education is the main tool for assimilation.”

“It is evident that there is discrimination of Russian speakers in Latvia. They are oppressing us and now we are finally reacting. The same was happening with Russian speakers in Ukraine. In Latvia we will not be so flexible as allow the assimilation of our children.”

In addition, Zdanoka criticizes the EU and the Council of Europe for having ‘double standards’ concerning the protection of Russian speakers in Europe. “If anti-Semitism and racism is prohibited, we also have to prohibit ‘Russophobia’ and ‘Islamophobia’, which is very widespread in Europe. As a Russian, I can feel it.”

Respect for the rights of minorities is one of the values of the EU. Article 21 of the Charter of Fundamental Rights of the EU explicitly prohibits discrimination on the basis of membership of a national minority. Latvia has fulfilled all the EU criteria concerning the rights of minorities before the country joined the EU. However, nowadays, the language issue is still controversial.

According to the EU, the language issue in Latvia is something of national concern. But with the current situation in Ukraine the fear grows in Europe that a similar unrest might also spill over to the Baltic states. And the same fear is felt by many Latvians.

Many of them go to minority or so called Russian language schools. Today’s education law thereby states that 60 per cent of all classes have to be conducted in Latvian and 40 per cent can be conducted in any other minority language, such as Russian.

However, the government wants to change this as there are still many ethnic Russians who only speak Russian and don’t speak Latvian. According to the coalition agreement, starting from 2018, state-funded minority schools should switch to education in Latvian only, except for the minority language classes and ethnic culture subjects.

Protesters are standing in front of the Ministry of Education in Riga, Latvia. Photo by Steven Musch

The protesters see this education reform as the destruction of their culture and language. However, Ina Druviete the Minister of Education and Science, stresses that the Latvian educational system is “not discriminatory”. She explains that the government wants to increase education with Latvian as the language of instruction, while preserving minority language education.

“Everything happens according to EU standards. Latvia’s educational system is unique. We have primary education in eight minority languages and secondary education in six. We will continue with the same system we have already had for twenty years and we will preserve our minority education programmes.” She adds that she can’t speak of the ‘closing’ of so called Russian schools. “Some schools are closed by municipalities but the state can’t impact this.”

The current situation in Ukraine has made the tensions in Latvia higher. Many Latvians are afraid Russia could do the same in Latvia as in Ukraine. The chance that this will happen, however, is quite small, because Latvia is part of EU and NATO since 2004. This year Latvia also introduced the Euro.

The protest last Thursday has been the third one since Prime Minister Laimdota Straujuma made a statement in January that Latvia will switch to state-funded education exclusively in Latvian “sooner or later.” Meanwhile, Russia has critisised Latvia several times for the ‘discriminative’ treatment of the country’s Russian speaking population. Russian Foreign Minister Sergei Lavrov recently said his country wants to open special Russian schools in Latvia.

According to education minister Druviete this, however, would be “unacceptable”.