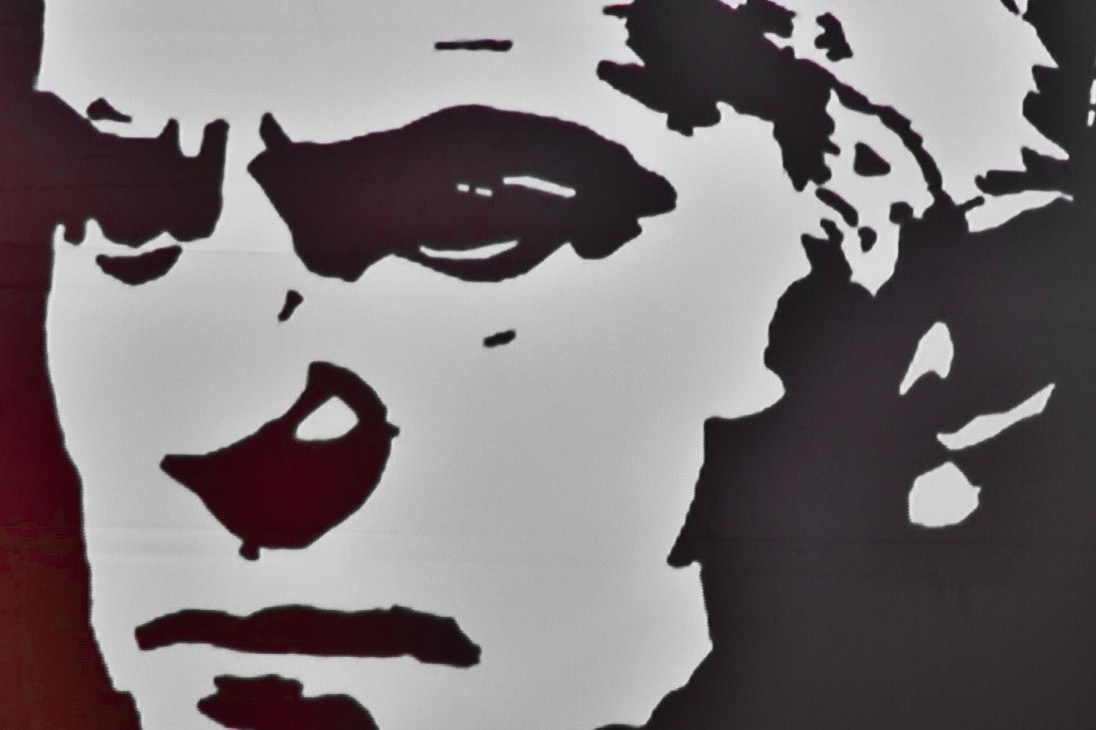 Ataka is the main Eurosceptic party in the country. The leader of the party, Valen Siderov is a very controversial character. Provocative, anti-Muslim and anti-Turkish, his face is everywhere on black and red posters in the city. Siderov’s eyes watching you wherever you stand, like a modern Big Brother.

Valen Siderov used to be a journalist. He started to become famous when he hosted a show on Skat TV in 2003. After running for mayor of Sofia, he participated in the 2005 parliamentary elections for which he created the Ataka party. He won 8.14% of the total votes and his party became the fourth biggest group of the parliament. The next year he finished second (with 21.5% of the votes in the first round and 24% in the second one) for the presidential elections against Georgi Parvanov, from the socialist party. During the 2009 parliamentary elections, the party did better with 9.4%. They also won 2 seats of the 18 Bulgarian ones in the last European elections.

An advertising for the party’s channel

The party can be positioned on the extreme right of the political chessboard. Ataka is mainly nationalist, racist and xenophobic especially towards Jews, Romanians, Muslims and Turks.

Ataka wants the re-nationalisation of former state companies because most of them were “stolen” by “foreigners” according to them. They also put priorities on education, healthcare and welfare (minimum wage) and want the institutionalisation of the Bulgarian Orthodox Church. They are against the Bulgarian membership in NATO and eurosceptic.

In 2011, Ataka launched its own TV channel called Alfa TV where Siderov can freely broadcast his ideas.

If Ataka does not want to quit the European Union there are several things they would like to see changed. First, the two-speeds union; “the EU is supposed to be the Europe of the nations. Instead of this, it has turned into a Europe of one or two big countries,” says Kristiyan Dimitrov, member of the national parliament for Ataka.“Basically it’s a pyramid structure in which the later you become a member, the closer you’ll be to the bottom.” According to the 22 year-old politician, his country did not benefit much from the organisation. “It has just helped Bulgaria in becoming more colonised. Right now there are big corporations which hold the greatest industries and sectors such as the energy sector, water, community services, transport, mobile phones, gold mining.” He accused these companies of taking the profit of Bulgarian resources and exporting them without leaving anything for the country.

“Another major reason is the fact that Bulgarian people are regarded as second hand people in the European Union,” he adds. A lot of citizens who studied or worked abroad felt these emotions. “How and why should we be member of such a union? They look down on us, they in a way, despise us and do not have any respect towards Bulgarians,” says the young politician.

Ataka’s relationship with the young Bulgarians

However, Ataka remains a minor party in Bulgarian politics and young people do not worship it.

“Stupid,” “dangerous” or “sick”. These are the words they usually use to describe Ataka. A 2005 study made by the Gallup Bulgaria showed that the most numerous group age of its electorate had an age between 30 and 40 years old.

Ivaylo Donchev, a law student who used to support them, mostly due of patriotism. He stopped when they became too aggressive towards ethnic minorities. “You can’t say you’re a nationalist and be aggressive against other nations or ethnic groups. It contradicts my idea of nationalism,” he says. The same thing happened for Kiril Ganchev, 22 years old and student in political sciences. “Ataka took a wrong turn because they were talking in a very extremely way about the muslim minority in Bulgaria,” he says explaining why he left the party.

According to Ivaylo, Ataka choose to position itself as eurosceptic purely by political strategy. “Their euroscepticism is not sincere. Those people are just taking advantage of certain parts of the electorate. There was room for such vote and they took it.” The party promises to protect the national interests against a European Union, which would erase their culture and identity.

Ataka mainly answers, these accusations by laying the blame at the medias doorstep. For example, after the 2006 presidential elections Siderov accused the government of repressive media pressure because no debate between Parvanov (former President) and Siderov has been done.

Kristiyan Dimitrov is a member of the party and member of the national parliament for them at the age of 22. He blames the media for a “black campaign” against them. “In a way, this has stopped probably a number of young people to understand what we stand for, our concept and our vision,” says the young man. According to him, the eurosceptic position has always been the policy of the leader, Volen Siderov, even before 2005. “He was always consistent in terms of his vision and policy about the danger of a membership of such structure as NATO and the European Union could bring to Bulgaria.”

Ataka might not be popular among the Bulgarian youth. However, the party can boast a very active youth organization, in which Kristivan took his first steps. The party enables the young recruits to quickly climb through the ranks and include them in the decision-making processes. The seduction method is efficient because the extreme-right party has the largest number of young members in the Bulgarian assembly.

Igor Novakovic, former student at the Bourgas University, did a research about the rise of the party. According to his work there are three main types of people voting for Ataka. The first ones are the former communists who are pro-Russia and anti-western countries. Then comes the nationalists who regret the glorious past of Bulgaria and reject the Turks and Greeks who conquered the country in the past. The last group is composed of the “people in the middle”. These are mainly unemployed or poor people who distrust their corrupted government and the political elite in general.

In the context of the European elections, Kiril Ganchev assumes that people voting for Ataka are patriotic people who fear that the European Union could erase their culture or identity. “They think if we have 18 member of the European Parliament for Bulgaria, they would protect our interest.”