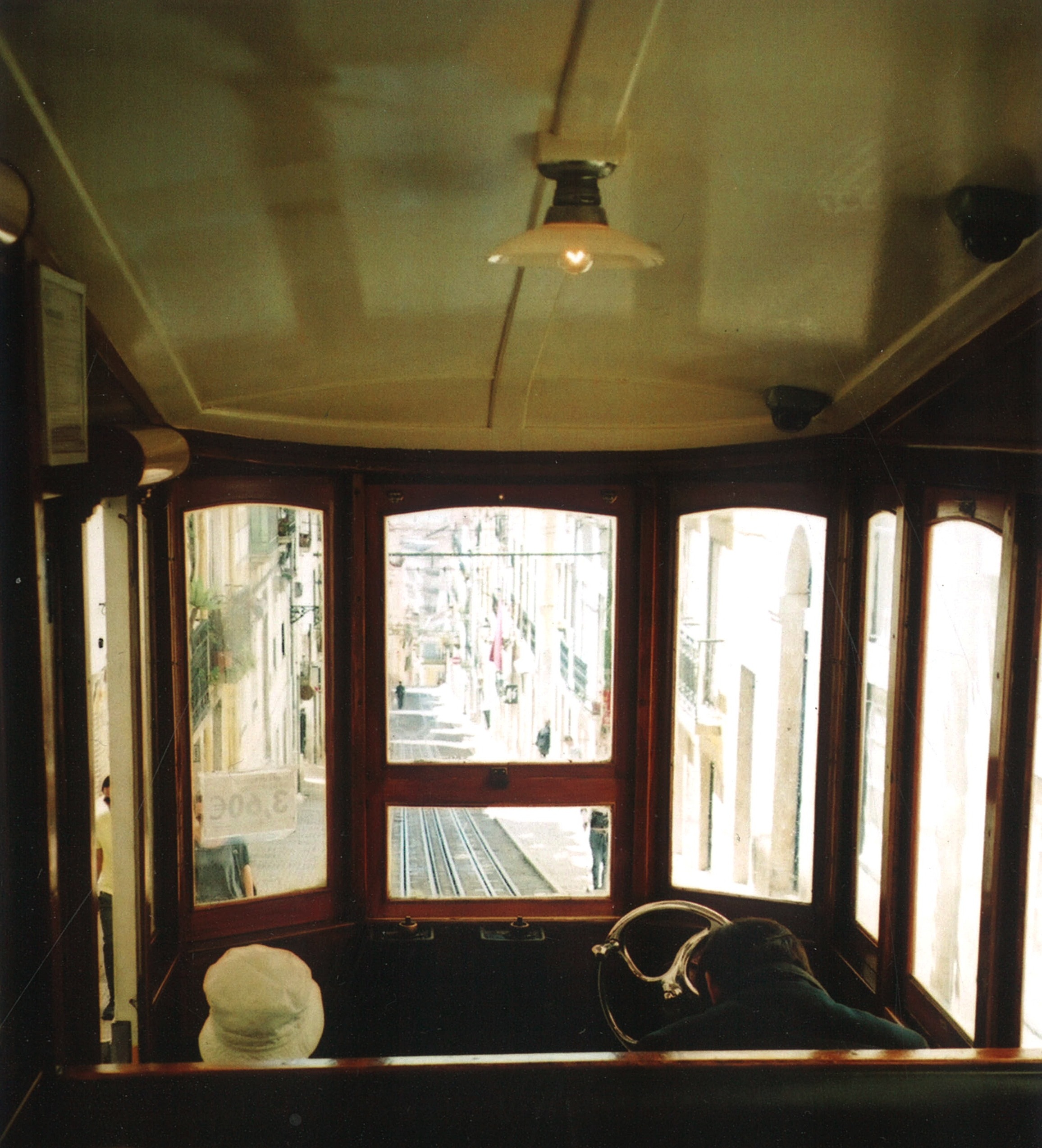 Share
Posted: May 1, 2014 at 12:48   /   by Leyre Latorre   /   comments (0)
Carnation RevolutionEurocrisisEuroescepticismLisbonPortugal

Tram is the most symbolic mean of transport in Lisbon. Some of them are working even before the Second World War II.

Lisbon cinemateque.Reopened to the public in January of 2003 after being remodelled, the Cinemateque presents an permanent expositions entirely dedicated to the history of the cinema.

Lisbon, “Rome” of the Atlantic, of the 7 hills. Internationally considered the capital of Europe during the Midlle Ages and the European capital of the culture during the final years of the 19th century. The portuguese town oozes nostalgia, melancholy, “saudade”.

Lisbon tastes of cod drying in the sun, parched by salt that enters the estuary of the Tagus river. Lisbon is a dying fado rumbling through the old tiles of the Manueline buildings. It has the flavour of an overseas-roasted coffee in the backroom of “O Brasileira”. The city is hailed by its legendary poets and writers like Camoes, Pessoa, and the penetrating voice of Saramago.

Its neighbourhoods are as decadent as are the Chiado bars and the cable cars (Do Lava, Do Gloria…), which climb to the hilltops and lookout points. Beyond, one can admire the impressive bridge named after April 25th, Salazar or Carnation revolution. Lisbon is also a cinematographic harbour that has appeared in legendary films like Casablanca.

Tiny and familiar, an urban jewel on the shores of a great ocean, which once opened its doors from Europe to the new world in the 15th century. It holds onto its past with pride, and looks to the future with hope. What once was, remains silent, lethargic in its tiles.

Portuguese urban life is an expression of softness. Life is less expensive than in the rest of Europe. Since it is a small country, it doesn´t produce enough to export. “Many times what happens is that we get oranges coming from Spain that are cheaper than our own oranges from here in Portugal. Since Spain has bigger production, they have similarly large scale, so they have lower costs than us“, explains Mafalda Nobre Carvalho, who works in E&Y as a senior consultant in Lisbon. She sounds proud of her country.

A Portuguese is a man full of dignity. Lisbon is not a failed city, it is full of romanticism not only in its streets but also in its cafes, squares, corners and patisseries. The Portuguese have a balanced life, a classic composure. Something that is missing in many other cultures.

Being part of the EU has affected them . The financial crisis made people reluctant to support the union. EU economic policies have damaged somehow the “good image” of the EU, with Portugal now the eighth most eurosceptic country in the EU with 58 per cent of the population not trusting its institutions. “When Portugal became part of the eurozone, Portuguese people were very much looking forward for it, and they thought that they were going to be rich overnight. They thought that they were going to reach the same French or German living standards, but the crisis showed just the opposite”, says Jorge Atunes, a camera shop assistant from Lisbon. While his face reflects the sadness in his eyes, his words hit with sincerity.

There was a lot of motivation. Portuguese people were very in favour of joining the euro. “It is not easy to understand what was the part of the fault can be attribute to the currency or to the politicians” says João Cantiga, an economist and professor from ISEG (Instituto Superior Economia e Gestão) in Lisbon.

Portugal asked Europe to bail them out in April of 2011 to the tune of € 78 billion euros over three years. Since then, the government has imposed drastic austerity measures. They cut pensions and made major cutbacks in the public sector, which has meant that many are now out of a job or must accept lower salaries, and the state of wellbeing has been hurt. “With the troika we have lost a bit of control of our country, but I think it was necessary. The political power was selling a false illusion to people. We lived with something we didn’t have. We lived loaning money for everything. And when the country entered into the eurozone we didn’t make the necessary reforms to minimize a financial crisis which could have come at any moment”, says Jorge Atunes.

Portuguese demands solidarity. Portguese is someone who gives you everything and asks for nothing in return. It is a country that overthrew a dictatorship and made a revolution with carnations instead of bullets .The light in the city of Lisbon is very bright and lights up the city from the early morning from 6am to the 9 am in the month of april. The noise doesn’t take the control of the city, nightlife breathes peaceful in massive concentrations of people.

The macro economic policies coming from the European Commission supervised by the council and the European Central Bank, act in the interest of the EU members as a whole. But the members of the eurozone are the ones putting up money for the bailout, depending on their own national budgets, meaning, bigger states that contribute more to the budget have more influence on the EU. “Each member state did the best for themselves, at some point they didn’t think about the consequences of some policies. It remains to be seen whether we can have a European Union with this kind of political structure and common currency”, says Francisco Countinho, an International, Media, Constitutional and European Law professor from Instituto Superior de Ciencias Sociais e Politicaiei in Lisbon.

The eurozone is a mix of sovereign countries, in which some member states are stronger than others. As Francisco Coutinho explains, member states with weaker economies need other member states to loan money, but those that would appear to have more obligations to help, like Germany, don’t have “any legal obligation to help”. For that reason they say that they are going to help but with conditions.

The crisis has hit the country, and has had a tremendous consequence on young people, economic growth and competitiveness. Aid packages came with some conditions that were tough for Portuguese people. “Some of the measures were not good, and probably the country suffered more than it should”, says Francisco Coutinho. But it is necessary to remember that on the journey to the euro, the Maastricht criteria says that countries that belong to the eurozone should have same rate of inflation and same rate of fiscal deficit.

The pro- European in Portuguese politics has been shaken by the eurocrisis: net support for the EU has declined from 41 percent in 2007 to 24 percent in 2013. Some riots demonstrate Eurosceptic attitudes among citizens. “I think people in Portugal start questioning the belonging to EU because it doesn’t bring transparency at some point. Right now we are facing civil problems. The problem is that we don’t see immediate outcome for this crisis. It is very difficult to cope with,” explains Coutinho.

The help coming from the Troika gave Portugal some air to breath in order make the adjustments they needed to balance their accounts. As João Cantiga explains the country has lost some of the sovereignty in the sense that they had to follow some rules. ”We have to go through increases taxes and cutting spending. But right now I think we are going to the second state, second type of priority, employment and growth, as recession is officially over. We have some positive GDP figures this year. But we have important issues that are going to stay with us for a while, which are employment issues especially with youth. Youth and employment is a serious problem.”

For that reason there is many Portuguese heading abroad.” There is a lot of immigration right now but I think we are in a road up, because I see a lot of friends that they are trying to change jobs and they can easily go from one job to another. Now this is happening. At the beginning of the crisis, it was hard, when I first left the uni, so three years ago, it was really bad. It was hard to find a job, a well-paid job but now the economy is going up”, explains Mafalda Nobre Carvalho.

I don’t feel a lot of European Union right now because stuff that happens in Ukraine with Europe pressing one way, and Russia pressing the other and nobody is doing anything to rescue them. I don’t think the EU is helping that much. Germans feel superior to everybody and even the fact that they call us PIGS (Portugal, Ireland, Greece and Spain), that’s just not nice, so I don’t feel that close to Europe.

When I am travelling and I am using euro and I feel European but when comparing my personality to the rest of European countries; they are too cold. South is much more available, friendly, the other are too cold, too strict and we like to party more, maybe, so I don’t feel that we have the same culture. Sometimes I feel we resemble more South Americans than Europeans. It feels good to have the euro, to travel, and we have a common history with the countries, which are next to us but I don’t believe we have the same mentality, the same way of living.

Nobody wants to get out of the EU. I don’t feel like I do. We don’t associate with the other countries, but we still believe that it is a good thing to be part of it for economic reasons. Maybe we criticize but we don’t want to get out of it, because we would be too isolated, we wouldn’t have commercial partners, it would be more difficult to have tourists, to import, to export. It wouldn’t be too profitable to get out.