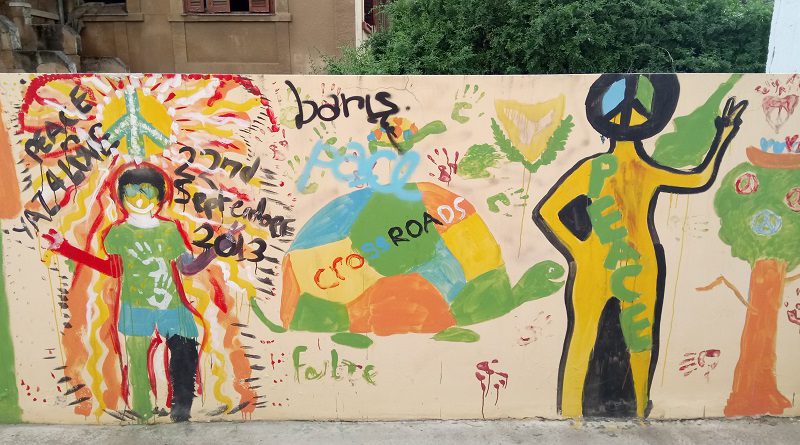 “If  we don’t teach our children peace, someone will teach them violence,” reads a message from the Home for Cooperation in Nicosia, Cyprus.

“Can you please take a video of my daughter?” a middle-aged man asks us and shoves the phone in our hands. It is on video mode. The man is looking eagerly to the right, where a girl in her teens is running towards us. With not another second to lose, her body bumps heavily into the male figure and they engage in what seems to be the longest hug.

No words need to be said. The escaping occasional sobs are enough to take this scene to a parallel universe where a family is united. Then, as suddenly as we were passed the phone, the now happy dad takes it back and the couple sits down at a table outside.

“The lady can’t cross to the South because she is a Turkish citizen,” Co-president of the Association for Historical Dialogue and Research (AHDR) and a Member of the Governing Board of the Home for Cooperation (H4C) Kyriakos Pachoulides explains with a shrug. “The guy is Greek and he lives on the South.”

This surreal play fits oddly in the surrounding environment: the daily Muslim prayer competes with the Church bells for attention, UN personnel take coffee breaks and tourists try to take sneaky selfies along the short walk between the European Republic of Cyprus and the unrecognised Turkish Republic of Northern Cyprus. This is the buffer zone, called the Green Line, in Nicosia, dividing the city in half and turning it into a capital for two states.

A place for all

Separated families like this one are one of the reasons why the Home for Cooperation is situated within the Green Line: the middle between a European state and an unrecognised republic is considered as mutual ground, an area everyone can access. The H4C is a yellow building opposite a dorm for the UN Blue Berets.

Barrels, metal fences and bags of sand stand ridiculously next to the colourful chairs of the cafe within the Home for Cooperation. The director of H4C, Marina Neophytou, believes that the position of the house is critical to what they are doing: “an inbetween meeting space” and a ”safer environment” for everyone.

The neutrality of the place starts with the location – neither of the two sides have to show their passports at the border checks, children of divorced families need not have permission by both parents and, most importantly, no one is crossing into another state.

But neutrality might not be the best word to describe the H4C as Evren Inancoglu, AHDR Board Press Officer and H4C Governing Board Member, explains. According to him, they are politically sided: “We are for reunification”.

These efforts to break down the barriers might work sometimes, but for now they mostly reach the already converted. Natalie Hami, a freelance journalist speaks up quietly, admitting that once upon a time she was the kind of person to not know what is going on. Her curiosity took her beyond the border checks. But for many young people on the Greek Cypriot side it is a question of ideals and the first challenge standing in front of H4C is to teach openness and to promote the neutrality of the place.

The location of the Home for Cooperation is one of its biggest advantages together with its inspiring team. Positivity radiates from this place, contrasting the grey, demolished surroundings.

“We don’t give our passport”, Sotivis Ioannou is a 22 years-old Greek Cypriot, strongly nationalist, he refuses to cross the border and “to recognise the illegal occupation” of the Northern Republic. For the citizens like Sotivis, entering the buffer zone and attending the events organized by H4C is out of the question. So, how to attract the more reluctant Cypriots?

H4C board member Pachoulides probably knows more than anybody that change is possible. From a nationalist family, through education he completely changed his tune and committed himself to the Home for Cooperation. He is now member of its Governing Board.

For him, the solution is to diversify the activities. “Culture is not enough, we know that, but it’s a good way to attract people from both sides.” They can come simply to enjoy a good concert or exhibition. The Home organizes many events such as language lessons, sports and cultural activities, it also gives the opportunity for others to host events on its premises.

The whole idea of the association is to create confrontations through education and art. Evren Inancoglu is a member of H4C and lives in the Turkish Cypriot side. He explains to us that three years ago, the association stopped calling the events ‘bi-communal’. “People came for the music, not for us,” he says. Is community cooperation still taboo in Cyprus? It is at least something that only few Cypriots have experienced and it doesn’t seem to be something easy to imagine for generations raised after 1974, the year of the division.

This strategy can also be regarded as a way to avoid exclusion of the many minorities here in Cyprus. This extreme prudence and wish for neutrality expresses one of the limits of the association: promoting dialogue in a country still timid when it comes to reunification talks, because as director Neophytou concludes, “our values go beyond bi-communal”.

More than ever, in this divided context, words have a role to play. It is not rare to hear a young Greek Cypriot calling the Republic of Northern Cyprus “occupied territory”. Talking with this generation reveals the weight of the years of mental barriers which have been subconsciously constructing their views.

“The other is like me.” – This is a sentence dear to Evren Inancoglu. But his large smile couldn’t hide the concern in his dark eyes. How can young people discover their similarities if they have been raised to think that beyond the border it is a completely different world sharing different values?

Indeed, the educational systems present opposing versions of Cypriot history. The heroes of one side are inevitably the enemies of the other. Ceren Bogac teaches architecture in the University of Famagusta in the Republic of Northern Cyprus. She thinks that history programs are hardly reconcilable, according to her, in some Greek Cypriot history books, the mention “don’t forget, don’t forgive” is still written.

At H4C, Kyriakos Pachoulides has a lucid view of this issue. “We cannot change the history programs but we can train the teachers”. This is one of the missions of the AHDR, hosted in the Home for Cooperation. In one sentence, they try to teach ‘historical thinking’ and ‘mutual understanding’ via conferences, seminars, and workshops.

The association wants to make young Cypriots think by themselves, go beyond their prejudices and realize by themselves that the common values can be stronger than the “points of divergence”. Natalie Hami comes to the H4C often. As a freelance journalist, she loves working on peace projects and is absolutely sure that “the younger the better” to “break these barriers down” and that giving up is not an option.

The Home for Cooperation and all the projects, associations and volunteers connected with it believe that they are just at the beginning of their journey. Marina Neophytou’s green eyes sparkle when she says that their “role doesn’t start or stop where the [reunification] talks do” and she believes a role for cultural appreciation and cooperation “will be even more important”.

Because change in Cyprus takes a long time – whole generations have grown up in a divided island and they do not understand the other cultures. H4C director, Marina Neophytou, calls it “transition period” – when all physical borders are broken down but the mental walls stay put. For board member Pachoulides it is important that both communities are prepared “to live together, to work together, to accept each other and to respect each other”.

And in the H4C they believe that this dream is achievable because it sounds a lot like the opening of the borders in 2003. People thought it would lead to massive disagreements on both sides but all it did was give people the opportunity to travel and communicate with one another. And it worked fine despite the nervousness of the unknown, the curiosity about the other made people take a step forward and see what lies ahead, as board member Evren Inancoglu and freelancer Natalie Hami recall.

But “change always sounds frightening to the people”, Kyriakos Pachoulides sadly states. He admits that there is a big difference in the moods towards cooperation on both sides of the border. According to those working for the Home for Cooperation, at first it was more Turkish Cypriots coming to the H4C than Greek, mainly due to the economic and political situations in the North and South. For the Greek Cypriots traditionally, both Evren Inancoglu and Kyriakos Pachoulides say, it is not easy to consider change if what they already have is enough as “change is questioning my comfort”, as Mr Pachoulides believes. But for those to the north of the buffer zone, the economic situation is unfavourable, putting them in a state of “feeling caught”.

The young Cypriots and reunification
Create your own infographics Credit : Anne-Laure de Chalup

Even if Cyprus is on a changing track with more movement across the border, more interest in the other and more communication between the two communities, the Home for Cooperation will continue working in order to see more Greek and Turkish Cypriots sharing a chair in this yellow building, standing proudly within a demilitarised zone, next to metal fences, barrels and sandbags.