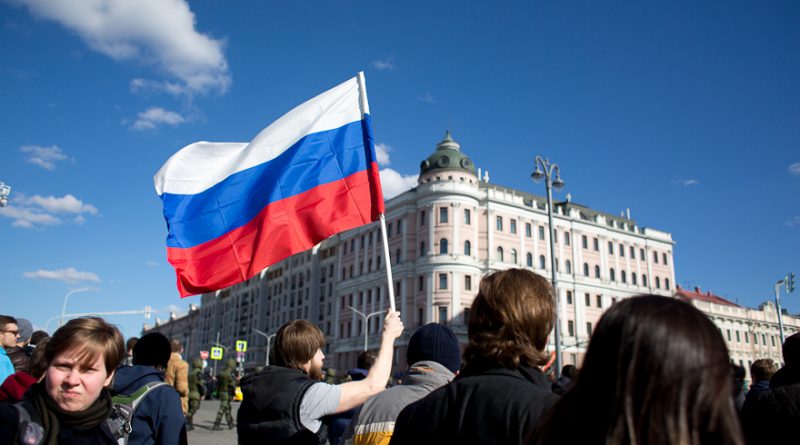 MOSCOW- Thousands gathered Sunday afternoon in Moscow to protest against the government. “We are not here because we expect change. We are here to show that we can all see the corruption, that we all know about it and that we will not remain silent.”

It is ten minutes after two and Tverskaya Square is almost empty. A few journalists are waiting patiently on the side. One of them, a local Russian reporter, thinks it will be an uneventful day. “I don’t think there will be a lot of protesters. There will be some, but since it is an unauthorised protest, most people will stay at home,” he said.

The Russian government had indeed forbidden opposition-leader Aleksej Navalny’s protest. “Those who show up are therefor very restricted. No battle cries or pamphlets are allowed. It will be over in half an hour.” When he was asked about the 5000 people that had signed up for the protest on VKontakte, the Russian version of Facebook, the local reporter laughs. “No, this is going to be a farce.”

A bit further away a man with a pair of sneakers around his neck is leaning against the wall. There is a child standing next to him, probably his son. Suddenly two police officers turn themselves to the man after which a handful of Muscovites start filming the whole event. The reason why was not immediately clear. When the officers forcefully dragged the man into the police van it turned out this was some kind of silent protest. The sneakers referred to a recent scandal Navalny revealed about Prime Minister Dmitri Medvedev.

In a recent Youtube video Alexander Navalny ousted sneaker- fanatic Medvedev for embezzling tax payer’s money. This was revealed after Navalny’s 30-man strong Anti-Corruption Foundation (FBK) traced down Medvedev online-order. Which showed that the Prime Minister owns several mansions and other luxurious properties. One these would apparently only be used for his pet ducks. Therefore, many demonstrators mockingly flaunted rubber ducks.

A farce is perhaps not the most appropriate term for the largest protests in Russia since 2012. After hundreds of people moved from Tverskaya Square to the much more spacious Pushkinskaya Square, helicopters surrounding the entire area and the police seemed to become more and more nervous, there seemed indeed to be something going on.

Passersby’s look like tourists. Men, women, children. Young and old. Wearing hats and selfie sticks. Nothing to suggest that the same crowd would rage against the police on the adjacent square. A few minutes later, the Moscow thoroughfare Trerkayastraat, was fully packed with more than 10,000 demonstrators.

Alexej Navalny is the driving force behind the protest and Russia’s most outspoken critic of President Vladimir Putin. The opposition leader was clearly not satisfied with the government’s lax response to his Anti-Corruption Foundation’s revelations in this Youtube video. On Nevalny’s VKontakte-page he describes his outrage: “Thirteen million people have seen our video, that is 9% of Russia’s population. What does the government do? Nothing! In every developed country this would have led to the resignation of the government. In Russia the authorities think that they can just ignore this. Maybe we should make ourselves a bit more visible in the streets!”

Another protester, student Olga Myalkina is convinced that Alexej Navalny is the perfect leader of the Russian opposition but doubts whether he should lead the upcoming revolution: “It is still unclear for me what his motives are. Does he actually want to improve our lives or is he just hungry for power?” Olga refers to Navalny’s recent ambitions to run for president in the 2018, which earlier this month were nipped in the bud when a Russian court reopened a 2013 case and sentenced Navalny to a suspended five years prison term. Because of that, the Russian law forbids him from practising any public function.

Navalny is appealing this sentence citing it is a politically motivated decision and promises to keep up with his plan to challenge Vladimir Putin in the upcoming elections. Regarding this, public support is obviously a desirable gift. Moreover FBK is the only NGO in Russia that investigates corruption. Differently said, no one controls the opposition.

Meanwhile seas of police officers flow out of  their combat vehicles while protesters shout slogans like: “Supporters of thieves, traitors to the country. We want a Russia without Putin. Shame, shame, shame.” Over and over again police divisions in the shape of triangles penetrate the crowd. Demonstrators are violently torn apart, carried away and arrested. A girl no older than sixteen years old tries to break free from the hands of five heavily armed agents. An old man is dragged away on his knees. Pushkinskaya square-turns into a scene full of anger and desperation.

The enormous gap between rich and poor in Russia, makes the fact that the political elite are buying expensive yachts and palaces from embezzled taxes extra painful for Olga and her fellow protestors. “The media tell us that Russia is doing well, but people are starting to realise the truth: more and more Russians can’t even feed their own children properly. Even with an education and a full-time job you might just have not enough money to live a comfortable life.”

This year it has been exactly been 100 years ago that the Russian Revolution changed Russia and the world forever. Many protesters agree that history will repeat itself. Natalia Demina stresses the importance of these protests: “This is not only a battle against corruption, it is an outcry for fair elections. I want next year’s presidential elections to be fair and transparent, but that’s impossible in the current situation,” says Natalia.

Olga agrees with Vladislav that if the government will not listen to the people, it is time for a new government. “The government suppressed the rights of the people. People who publicly speak the truth, ask questions or demand justice are persecuted. This must change.”

After a few hours of shouting and tear gas, and more than 800 arrests, including Alexei Navalny himself, it’s perfectly clear that the local journalist who predicted a ‘farce’ had underestimated the Russian opposition.