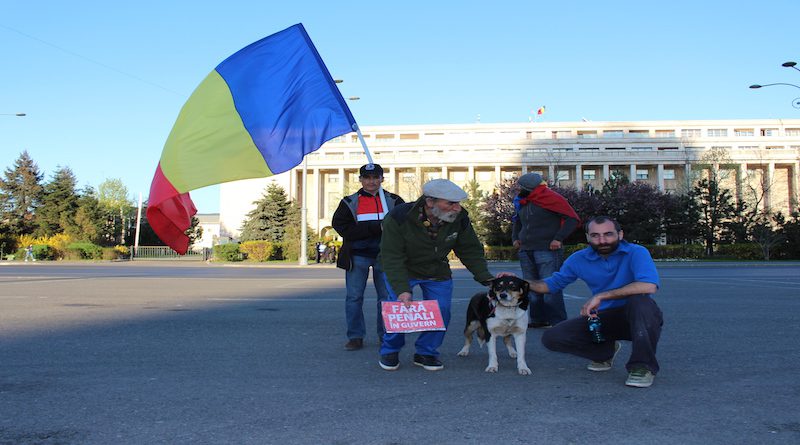 Sunshine doused Victory Square in Romania’s capital Bucharest is, two months after the big protests, relatively empty and quiet, with the exception of the rush of the city’s traffic. Nothing like what it was in January and February, when tens of thousands of fed up Romanians filled the square, protesting against the government. However, a solid core of combative protesters is still occupying the place every day, weaponed with flags, banners and unwavering determination.

It is the 64th day in a row that the 31-year-old Andrei Nicolas is manning the square. Draped in the Romanian tricolor flag, sitting on a foldable camping chair that faces Victoria Palace where the government is housed, he explains why he spends all his leisure time on a concrete square surrounded by dozens of roaring cars.

“My mom was killed during the revolution of 1989,” he said, referring to the period of violent uprisings in which longtime communist leader Nicolae Ceaușescu was captured and executed, ending 42 years of communist rule in Romania. “Now, 27 years later, it is our turn. We have to show that we are not afraid. We want a free country.”

But is Romania, one of the European Union’s youngest members, not a free country? Andrei Nicolas laughs. “No. The communists may not be in rule anymore, but their sons and nephews are in all the political places. We need politicians that care about Romania and the people of Romania.”

His friend Cālin Andrei joins the conversation. “Walk with me, I have to show you something.” At one of the corners of the square, on the opposite side of the road, a metal construction blocks one of the rare biking lanes in the city. “This was placed here for the media, so that they could take overview footage of the protesting crowd. Two months later it is still here. Two months!”

It is these things that show exactly what is wrong with the government of Romania, Cālin Andrei states. “They don’t care, they don’t give a fuck about the people.” The 26-year-old Adrian Badea, another steadfast protester, agrees. “The corruption in this country affects everything: our healthcare, our education and our infrastructure.”

He points at the road surrounding the square. “Look at the holes in the concrete. I work, pay taxes and the government just steals my money. Almost thirty years after the fall of communism in Romania we still have no highways. The money should be invested in the country.”

In the last month Andrian Badea only missed four nights of protest. “My brain wants to sleep but my heart wants to go to Victoria Square.” But Andrei Badea is a realist, and does not deceive himself. “We will need years to change this. It will take time, but if you do nothing, nothing will change. Step by step the system will be cured.”

He thinks that change can be accomplished if the people change. “We need to educate ourselves. We need to engage in public issues, speak with the government and unite with NGO’s that fight against corruption.”

Inițiativa România is one of those NGO’s, established after the death of 64 young people in the 2015 Colectiv nightclub fire, where safety standards were not met due to corruption in the government.

“The change we need in Romania is possible on the side of the community,” Elena Ghioc, co-founder of the NGO said. “I don’t see and expect any changes on the other side, the side of the government. There is no political wisdom in this country.”

Despite that lack of political wisdom, Elena Ghioc has faith that change will come. “There is a window of opportunities, after the protests. Hundreds of thousands of people took to the streets, and now they are speaking about how they can make a change in the long-term.”

Elena Ghioc doesn’t expect that change to come in days, weeks or months. “This is a very longterm project, but the fact that we have been contacted by a lot of people, shows that citizens are getting more involved and want to make a change.”

Andrei Nicolas, now approaching seventy days straight in the square, doesn’t care how long it will take. “I will leave when the government resigns.”