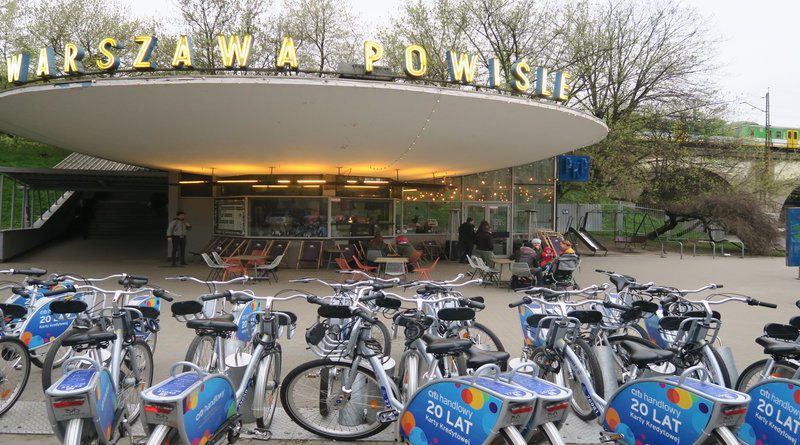 Warsaw is a growing city moving in multiple directions. On one hand, ordinary Poles have been responsible for a rise in progressive vegan cafes, cycling and trendy bars. On the other hand, the current government Law and Justice Party is dedicated to staying true to traditional Polish values and lifestyle.

On the outskirts of the city in a dim lit bar that sits under a railway line, Wojciech Tadeusz Kacperski, an urban activist who now works for the city council, expresses how Warsaw has transformed over the years and the significance of the bar to this increased progressiveness.

“The opening of this bar, Warszawa Powisle, is kind of a symbol for this era of revival of urban living in Warsaw.”

Warsaw itself is a city that has been forever changing, from rebuilding from the ashes of World War II destruction, to the revitalisation of the city after the fall of communism in 1989. Now, you can feel a current revitalization, from the towering modern buildings to the amassing bike lanes and the inescapable vegan presence.

“A lot of places like this were dedicated to young professionals, parents or students to spend time. These places are iconic for Warsaw’s identity,” Kacperski said in regards to Warszawa Powisle, the railway bar that helped to create a space for young forward thinking people.

“I just loved spending time going to a café or a bar for a debate where we could exchange our point of view on policy, writing articles about Warsaw and the way the city is governed,” Kacperski explains about these newer areas in Warsaw that give a voice or environment for young and passionate professionals.

But not everyone is pleased with the changes Warsaw is seeing. Earlier this year Polish Foreign Minister Witold Waszczykowski told a German paper “The previous government implemented a left-wing concept, as if the world had to move using a Marxist model in only one direction: towards a mixture of cultures and races, a world of cyclists and vegetarians…This has nothing in common with traditional Polish values.”

While the current Polish government may be moving towards traditional ‘values,’ the revitalisation, rise in progressiveness and Westernisation of the city cannot be ignored. There is a growing divide between higher politics and the direction that many progressive Varsovian’s are heading in.

“Progressive people are spending their time [in Vegan cafes and bars] together for sure, but it is not necessarily a place where they established something…You can go to a certain place and just by being there you can become political or make a statement…. I would not necessarily attach it to a political thing, although people tend to do that.” Kacperski said.

While it may not be overtly linked to the current political climate, it is evident Warsaw has grown to further accommodate a progressive or modern lifestyle.

“When we came to Warsaw more than 10 years ago there were only some classical Polish restaurants and if you look now every week a new place is opening up,” said Sigrid Janekovic from Warsaw Vegan cafe Organitheka, whose partner also owns multiple trendy bars around Warsaw, including the esteemed watering hole, Plan B.

However, it is argued by some that there needs to be a stronger link between governmental cooperation and the cultural growth of Warsaw.

“There is a lack of support, funding, and understanding for people engaged in the young and [alternative] culture in Poland/Warsaw.”

This is Joanna Turek. Earlier this year she resigned from running the Foundation for Public Space Research, a foundation that focused on the growth of culture, creativity and progressiveness in Warsaw. Turek cites lack of funding and the Law and Justice government as the driving factors for her resignation.

Along the same line, the relationship between Warsaw’s new identity and politics is clearly linked as Maria Burza from Vegan ‘Cafe Kryzys’ explains,

“These cafes are super expensive that cater to an exclusive group of health-oriented yuppies, they serve gentrification by pushing out poorer local folks, most of them are very far from any progressive politics. We are involved in our local politics and it is evident to us that going vegan [is political].”

“We don’t want to go backwards, we want to go forwards preserving this city we have from the past.” Urban activist Kacperski concludes.

Warsaw is a city which is continuing to grow in a range of directions that are being driven by very different ideals. Ordinary people have proven to be effective in shaping the identity and culture of Warsaw, while the government has a different idea for Poland’s identity as a whole.