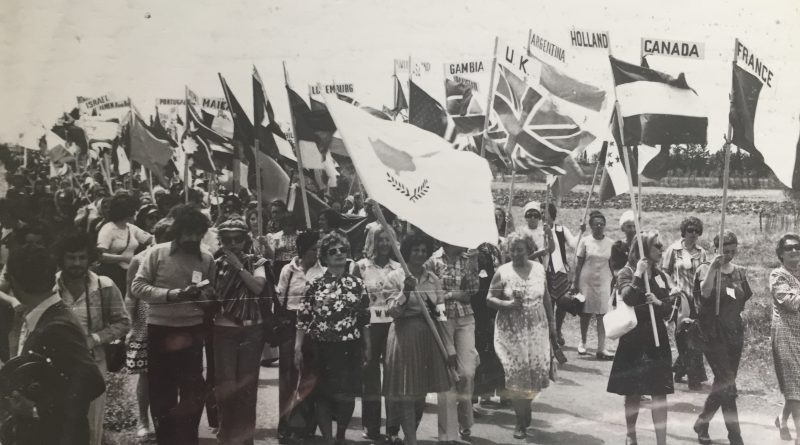 “It was the 20th of July, 1974 in Kyrenia. My father ran up the stairs at six o’clock in the morning and he said: “The Turks are invading, do what you have to do and protect yourself!” We saw the warships coming and at the same time, they were bombing military camps in Nicosia. Soon after the bombing, we could see the parachutes coming down, it was like I was watching a film.”

The idea of the walk began when historian Diana Markides was thinking about what she and her friends could do about the situation of the island. “At that time, there were refugee camps all over the island. A lot of people were displaced, hurt or killed and nobody seemed to do anything. Then one just said: “Why don’t the refugees just go home; why won’t they go home to see what happens? And from that, we build up the idea; we organised an attempt for people to go home, so that we could show the world what happens.”

Over the years, several organisations and events have been organised with the aim to involve more women in the debate of the reunification of the island.

Magda Zenon is one of the women who started to be involved in women’s organisations and movements, when she came to Cyprus in 2000 after she lived in Greece. Six months after she started working at a newspaper, there was a conference on what women in divided societies can do. They came together and out of that conference developed a group called Hands Across The Divide. According to women’s activist Zenon, this was a unique group, because it was the first time that women from different parts of the island came together and formed an organisation with one management committee.

“This was something unheard of, because back than, if you crossed the border from south to north, everything was monitored and checked and because of that, it was almost impossible to work together with the two sides.”

The aim of Hands Across The Divide was to bring gender equality to the streets and let women join the conversation in the reunification.

Hands Across The Divide therefore developed the Gender Advisor Team (GAT). GAT was a group of women who came together and put together recommendations regarding property, economy, governance and citizenship, which were handed to the negotiators.

One of the recommendations of GAT was to put a gender focal point in each focal group of the negotiations, because this subject was not included earlier on, according to Zenon.

Professor Docter Umut Bozkurt was appointed to this technical committee. “It is an active committee that works together on peace negotiations, trying to incorporate women. A difficulty in the technical committee is the fact that it only compromises people from the civil society some say.”

This is not the only boundary the technical committee, which includes 12 Greek Cypriots and 12 Turkish Cypriots, experiences at the moment. Bozkurt explains that the committee can’t make much progress at the moment, because the recommendations they make have to be monitored. “We need the blessing of the two presidents before we go ahead. We can’t go and sit to negotiate with the Greek Cypriots as we like, because there are certain constrains and mandates and everything you say has to be improved by the two leaders. So now the two leaders can’t manage to sit on the same table, because of the negotiation issues and unfortunately this also compromises our work.”

At the moment there are 18 seats in the cypriot national parliaments held by women; that is 16 more than back in 1990, according to the World Bank. Despite this rise, and a feminist member of parliament, who recently proposed to change certain laws to improve the benefit of women; Buzkurt can’t see the fruits so far.

Zenon and Buzkurt think that the voices of women have to be more implemented in the reunification talks, which makes the current situation even more frustrating.

According to Bozkurt, the people who were really optimistic about the reunification talks saw this as a historical opportunity which is probably lost at. Due to all the issues going on at the moment in and around Cyprus and this also has consequences of how women try to make a change in the reunification.