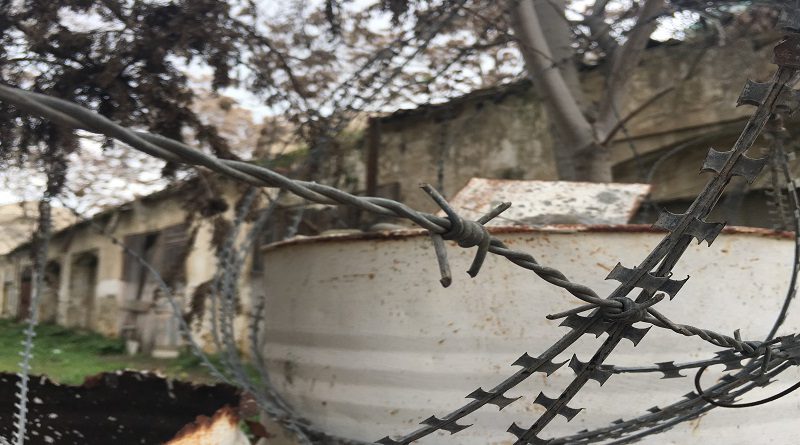 The island is a place of paradox with five armed forces protecting just over one million people living in the sixth safest country in the world. Although the military presence is a daily humour inspiration, it is also a bargaining chip in the talks for reunification.

Walking in the demilitarized zone of Nicosia, one cannot fail but notice military men wandering around, eating KFC and watching soap operas.

The most action these men have seen is if the Big Mac delivery gets cold by the time it reaches the old Ledra palace hotel where the UN men are situated or the foam of the frappe shrinks too fast before a middle-aged obese man can take a sip through a pink straw.

Scenes like these are quite common in the Green Line – the area between the Republic of Cyprus and the self-declared Turkish Republic of Northern Cyprus (TRNC). In the middle, the UN peacekeepers’ dorm is being guarded by two 18-year-old Blue Berets, according to whom their post is needed to protect Ledra Palace from the “Greek on this side and the Turkish on the other,” points the boy to the left and right but his female colleague hurries to correct him: “No, the Turks are on the other side.” Such examples show how invisible the Cypriot conflict actually is: even those involved daily battle to remember where the participants are.

Welcome to the island of paradox: a European state close to the Middle East, sixth safest place in the world with five armed forces, people making fun of the uniforms but refusing to let them go.

This contrast within the topic of security is deeply rooted in Cypriot history and is still a stumbing block, holding back the reunification talks repeatedly.

While Turkey and the Turkish Cypriot community want military forces to remain on the island in the form of guarantee powers, the Greek Cypriots and the EU reject that proposal.

This security issue has turned the frozen conflict in Cyprus into one of the longest UN peacekeeping missions, in which the Blue Berets have jurisdiction over a buffer zone along the island. Apart from them, the Turkish army, the Greek armed forces, the National Guard of the Republic of Cyprus, and the British, situated in two military bases, all have men stationed on the island.

However, the tension is “comfortable” as associate lecturer in Security and Diplomacy Studies at UCLAN University Dr Zenonas Tziarras believes. “Obviously there are too many armies, but for some reason we still feel relatively safe because the conflict is a frozen conflict, it is a comfortable conflict. We do not see it as very probable for an invasion in the South.”

This could be seen everywhere on the island: from the UN soldiers who have to drive around with 20 km/h limit to the National Guard soldiers painting walls in the center of Nicosia to the Turkish military men drinking afternoon tea in the cafes.

Yet, Cypriots are not ready to give up their armies.

The number of Turkish military personnel differs strikingly depending on the source: the UN states there around 30,000 soldiers stationed on the North, while Turkey states the number is less than 1,000. In an email reply for euroviews, a spokesperson from the TRNC Ministry of Foreign Affairs refused to be precise.

“Under the circumstances the Turkish military presence on the island is a vital security requirement for the Turkish Cypriot people, especially in the absence of a political settlement, as it serves as a deterrent against the repetition of the Greek-Greek Cypriot aggression. I would like to, once again, underline that reducing Turkish and Greek troops stationed on the island is and has always been part and parcel of the comprehensive settlement negotiations.”

An obstacle for reunification

Associate Professor in the Department of Social and Political Sciences at the University of Cyprus, Yiannis Papadakis, doesn’t “feel safe anymore” and although he would prefer not to have any military presence, he cannot see a future without them. According to him, his change of heart cannot be traced back to one reason only but to the whole situation of the current talks for reunification: from the international attention to the interests of Turkey and the growing influence of nationalistic parties.

“For most Greek Cypriots to actually see a solution, they will say we need to see Turkish soldiers leaving the island because it is the occupying force, we don’t want to negotiate with the occupying force. The majority of the Turkish Cypriots feel like the military should stay at least for a transitional period.” film director Chrysanthou explains.

He believes an army of guarantors, which includes neither Greek nor Turkish soldiers, might be a solution for people to feel safe.

High diplomacy talks are expected to continue on Tuesday, but for now, a decision seems far away. Being used to the men with guns drinking coffee on the main strip of Nicosia, Cypriots are clearly unsure whether their presence makes the environment safer or it exacerbates tension.