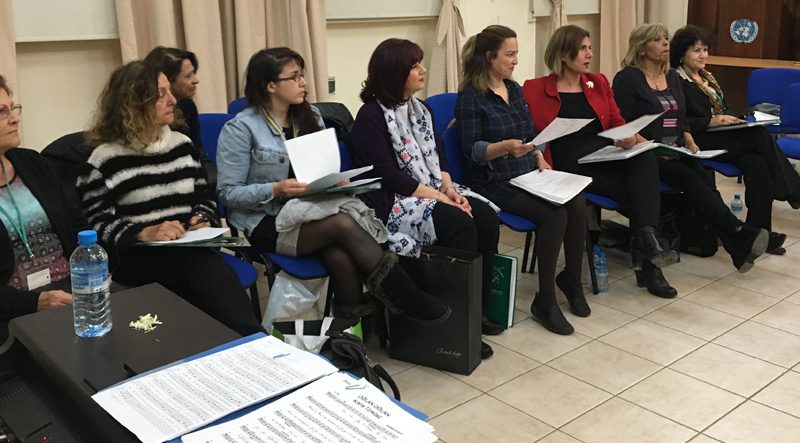 Greek and Turkish Cypriots are coming together in Nicosia’s no-mans land to set an example for peace in Cyprus. For the past 20 years The Bi-Communal Choir  for Peace in Cyprus has been using music to break down the division between their two communities.

In the halls of the once-opulent Ledra Palace hotel, within Nicosia’s no-mans land, Greek and Turkish Cypriots stand side by side, holding hands as they sway to the harmonies of their collective voices.

Smiles radiate from the choir members’ faces as they join together to sing a piece in both Greek and Turkish – a song for all the people of Cyprus, no matter their background.

The choir raises their hands skyward as the flamboyant and expressive maestro hands the floor to her Turkish counterpart mid-tune as the song switches languages, and crescendos into a passionate chorus of sound.

For twenty years the Bi-communal Choir for Peace in Cyprus has gathered in the buffer zone between the Republic of Cyprus and the Turkish Republic of Northern Cyprus (TRNC), weathering the tempest of political tension that continues to divide the island and is setting an example of how the island’s two people’s can live and work together in harmony.

A model for cooperation

The choir has over 50 members, hailing from both the TRNC and the Republic of Cyprus, setting out to establish a spirit of peace between the two communities through music.

The organisation of the choir has been key to its success, run by a coordinating committee of equal parts Turkish and Greek members, decisions are made with deep consideration and respect of each community’s traditions, identity and politics.

Costis Kyranides is a clinical physiologist, and has been a member of the choir since 1998, and says the decision making-process of the choir sets an example of how the two communities can work together on a governmental level.

“The [council] is chosen by all the choir, so Greek Cypriot vote Turkish Cypriots in, but also Turkish Cypriot members vote the same way. So we all vote for all the eight members, it’s a unifying element.” Mr Kyranides explains.

“All decisions are made unanimously. If there is a difficulty in making a decision, we postpone the decision for the next meeting, and we try to understand why there is this discrepancy, especially if it is between the two communities.

“We have learnt to reflect on what may be the meaning of their opposition. And this has helped us develop a better sensitivity to the sensitivities of the other community.”

Stepping in on the choirs rehearsal, one could easily mistake the practise session for a musical family reunion, as both Greek and Turkish Cypriot members, chat, joke, gossip and laugh just the same as any family does.

The choir creates opportunities not only for the external peace building process, but also internally, as close-knit group shares not only practise sessions and performances, but their social lives, cultures and their own families.

Alexandra Katsou, is a Greek-Cypriot English teacher, and has been a member of the choir for 10 years. She was inspired to join the choir, after attending their performances and seeing them as people ‘fighting for peace through music,’ and has now found a way to connect with the other community.

“I was born in a place that didn’t have any Turkish Cypriots, it was not a mixed village. So I hadn’t met any Turkish Cypriots until I went to London for studies. After that there was a dividing line, we were together in England, but we could never meet in Cyprus. It was a tragic thing, we couldn’t even communicate, there was no internet,” Ms Katsou reflects.

“I’m really happy I belong to this second family. It has changed my life. It has helped me see things in a different way, it has given me the chance to learn about the Turkish Cypriot way of thinking, the way they live, the common pain that we suffered, the common culture that we share.”

Yucem Rasimoglu is a Turkish Cypriot, and has been a member for six years. He shares Ms Katsou’s sentiments that the choir is a way for people of both communities to come together to learn and to set an example for the future of Cyprus.

“I am very happy to be involved with the choir. The choir has become my second family, because we have been meeting every week, sometimes twice a week, we are also meeting socially. We are happy sending a message to Cyprus and to Europe that we really want our country to be re-united,” tells Mr Rasimoglu.

“In both communities there are people who feel that the other community is a kind of enemy, but we are showing them that for the last 20 years this group of Greek and Turkish Cypriots are doing something together, they love each other, the respect each other, and they believe that Cyprus can do some kind of unification taking a sample of the choirs attitude to the other community.”