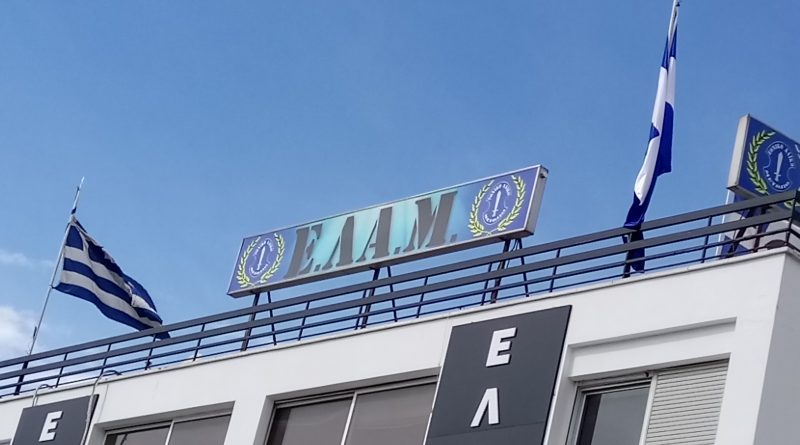 Enter the young sections of the nationalist Greek Cypriot party ELAM. The ones who don’t want a reunification of the island.

The Greek flag flies in the air of a fancy hotel in Larnaka. A 10-year-old boy is brandishing the blue and white standard, full of pride. Suddenly, a gunshot sound surprises the audience, the kid pretends to die, killed by the enemies of the nation. After an hour of speeches, this performance closed the ELAM celebration of the liberation against British. At this point, the crowd is shouting, applauding. The black and white pictures of Greek fighters killed during the conflict achieved to rouse the crowd’s national passion.

It is the day before a controversial Cypriot National Day : a celebration of the beginning of the armed fight for Cyprus against the British rule.For nationalists, those fighters are heroes and fighting for the country represents the ultimate honour. Every year, ELAM, the national popular front of Greek Cypriot celebrates this event and commemorates the sacrifice of their “heroes”. This year, the majority of the audience is very young.

“Schools made us nationalists”, Sotiris Ioannou, President of Youth ELAM Front said. Like him, Panayotis Hasikos, 17 years old member shared his concerns. He is particularly worried that his generation would forget and think that they “don’t have to care about this things, it’s the past”. For him, the duty of remembrance must be even more important now than ever because “they grew up in a country destroyed by Turks who killed people”. For this teenager seduced by the ELAM’s ideas, history is one sided, Greek Cypriots are the victims, Turkish Cypriots the oppressors.

Zenonas Tziarras is lecturer at the UCLAN of Pyla and politics analyst. His explanation is simple, youngsters from both sides of the border weren’t raised with the idea of a possible cohabitation. “They need background” he said and added “nationalist speeches are very simplistic”. This is one of the reasons why Telemakos joined the movement, “they are simple folks, it’s different”.

ELAM fights for the country. They want the “illegal inhabitants” of the North to leave. “We can’t live together” as different young members said during the celebration. They affirm that the values are too different to coexist but concede that they have never been to the North. Sotiris Ioannou, president of the ELAM Youth Front affirmed that if ELAM members would cross the border, they would be arrested because regarded as terrorists in the Republic of Northern Cyprus.

More generally, ELAM members refuse to cross the border by pure ideology. “We don’t want to be tourist in our own country” Maria Evangelou said. For them, giving their passport at the border checks is a way to legitimate the Northern Republic of Cyprus and is out of the question. They assured that the island is Greek through its history and the Cypriots values are Greek Orthodox. Their main fear is the islamisation of the country according to politics lecturer Zenonas Tziarras. They are particularly afraid of Turkey’s influence and of Turkish settlers. The President of Youth ELAM Front confirmed that for him “settling is a crime against humanity”.

“When I see a Turkish Cypriot car licence plate, I get angry”, Panayotis Hasikos said. “We don’t like Muslims, we don’t want them”. Shamelessly, the 17 years old member continued, “sometimes we have to use violence”. In the past, ELAM hit the headlines for aggressions towards muslim Turkish Cypriots. Propaganda for some members, part of the movement for others, the imagery of violence is omnipresent in ELAM. In their flag, first, a Spartan sword in a Greek blue and white cross and in the speeches of their members, supporting that the National Popular Front is the only party to “fight” for the nation. It’s a question of heritage and race, and an imperative to save it.

The answers for solution differ from member to member. Panayotis, the high school student claims a pure and simple unification of Cyprus to Greece. “Just like Santorini” he said. For Maria Evangelou, the repartition of the territory must be proportional to the repartition of the population: 80% of the population in 80% of the territory. But in all these reckonings, reunification is out of the picture. “Impossible” for Maria Evangelou, “a real threat for the next generations” for Panayotis Hasikos. The latter affirming that it would be confusing for them: “they won’t know if they are Muslims or Christians”.

Talking about a possible peaceful mixed population sounds like an abomination for these young nationalists. Committed to a fight against a concieved enemy, they seem to see the world like the play of the celebration: black or white .