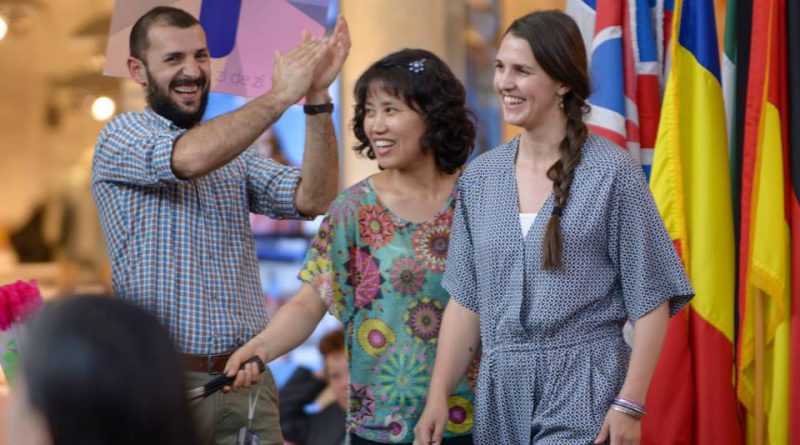 In a classroom of an old school building, a thirty minutes’ walk from the city centre of Brasov, all kinds of migrants are welcome to share their stories. The local government donated this building to all the NGOs in town. On the same storey, migrants and refugees as well as children with autism can find a place where they will meet people with the same backgrounds and experiences. Although it looks like a nice act of the municipality, the old classrooms have to be warmed up with small red-coloured electric heaters, purchased by the NGOs themselves.

Due to the lack of integration support for migrants in Brasov, Astrid Hamberger founded her Migrant Integration Centre herself in 2011. “Even though there were, and still are, not as much migrants in Romania as in Western European countries, here was just no support to be found for the integration of migrants”, tells Hamberger, “Migrants just settled down here, they got their papers done, and then what?”

The Migrant Integration Centre is kind of a one-man’s band based around Hamberger herself. She helps the local migrants out with somewhat everything: from organising language courses, and help the new coming people to get a job, to assistance with all kinds of paperwork to help foreigners to get their Romanian citizenship.

Ali Rahmoun, is a young entrepreneur and well-known guy at the office. He’s a successful Syrian refugee who set up his own business in digital design of sport wear. With the help of a friend who already lived in Romania, Ali managed to flee to the country by plane three years ago. Today, the excitement in Ali’s eyes betray his calm demeanour. After three years of being in contact with his family over Skype, Ali managed to bring his family over to Romania. “I’m very thankful that Astrid did all this effort for me and my family to make it possible for them to live in Romania as well.”

Ali’s main costumers are mainly from the US, therefore he manages run his business in English. But his Romanian is after three years still not good enough to have a decent conversation with a local who only speaks the mother tongue. “I used to follow these language lessons that the government provided, but it was quite difficult for someone in his twenties to have class from someone who’s used to teaching children.”

Ali shares this experience with lots of other refugees and migrant throughout Romania. Before Hamberger decided to organise her own language courses, there was no way to learn Romanian in Brasov. However, every city should provide these opportunities for the new coming foreigners in the country. The classroom as well as the teacher should by law be provided by the school board, a group of representatives of all the school of a city. Besides that, the local governments should pay the professor.

“The written law in Romania always looks really promising,” states Hamberger, “But, when it comes to the implementation of these laws, it goes wrong.” Up until now, the school board as well as the local government are not doing their duty. Hamberger has to open up her own office and the two teachers that the local school board have picked for the language courses are still working voluntarily.”

European border countries on the big migratory roads like Greece and Italy are housing way too many refugees than they can deal with for the moment. As a matter of response, the European Union has presented their relocation plan.

In this plan, Romania accepted to welcome up to six thousand refugees from Italy and Greece on Romanian soil. Up till now, the government doesn’t manage the give these refugees coming from Greece or Italy the basis for a fluent integration, while NGOs are doing as much as they can to fill up the gabs in the government’s social support for foreigners.

“Integration should be a two way’s process,” says Hamberger, “we gather all these foreigners who are willing to learn the language, but due to the authority’s lack of decent implementation of these laws, I’m afraid that my teachers will leave next year.”

However, Ali don’t feel the urgent need to speak the Romanian language due to his English-speaking customers, he and a friend of his did subscribe for an intensive three-week’s language summer course, but suggested by a private organisation. “After this free course from the government, I’m able to have a standard conversation, but, I’ll be happy to catch up and take it to a higher level,” says Ali determined.

Hamberger is a bit nostalgic towards the time former prime minister Viktor Ponta was still in charge. Back in 2015, he used to bring all NGOs together to figure out Romania’s capacity to ensure they could give a decent integration to those who – however not that many – stranded in Romania.

Today, it seems to be more of a competition between all the NGOs dealing with migration in Romania. These NGOs are battling each other for the same European funding, to make sure they can keep their own business running. Though, Hamberger stays positive, “On the other hand, it’s good that we have several competing NGOs. There are other Eastern European countries like Slovakia who barely have any NGOs who are concerned about the refugees and where the government is openly against Europe’s relocation of refugees.”