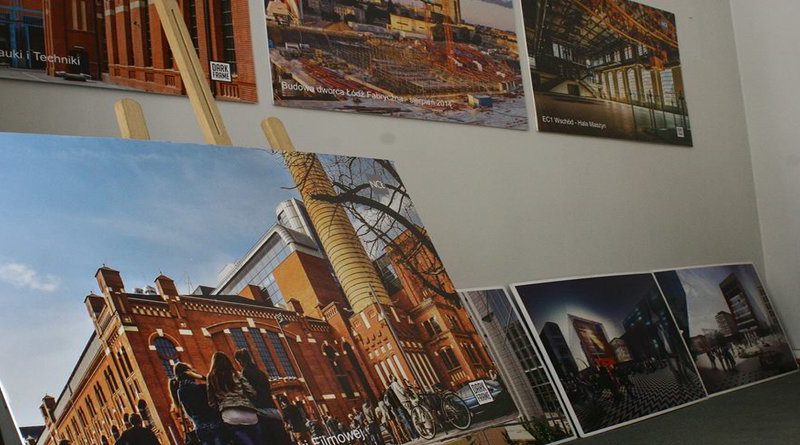 Once touted as the ‘Promised Land’ of Poland, Łódź was the fastest depopulating city in the country in 2004. But because of a successful revitalisation of the city and the modernization of Poland, Łódź is now again looking to live up to its nickname.

Kasia Korzeniowska clearly remembers when she visited Warsaw with a friend while backpacking through Europe in 2000. Her friend looked around, astonished, at the grey facades of Poland’s capital. When Korzeniowska returned years, later, the opposite reaction happened.

“Where have all the skyscrapers come from? I remember 15 years ago it was – ugh, Warsaw, Soviet, grey”.

This staggering evolution from part of the Soviet regime to a modern and vibrant metropolis reflects the development Poland has gone through. Two hours drive outside the capital, the lesser known city Łódź is undergoing the same phenomenon.

Łódź is Poland’s third largest city and was renowned for its textile industry, but when the factories closed, the city had to change. Today Łódź is known for Manufactura, a hip mall in the old factory, and is attracting business and young people both from within and outside of Poland.

Kasia Korzeniowska is one of the many foreigners who have recently moved to Łódź. Born a Londoner with a Polish father, Korzeniowska moved to the city two years ago to teach English.

She explains that despite being one of the larger cities in Poland, it is also one of the cheapest.

“For what I earn to how much I pay for rent, to what the cost of living is – I send money home.”

“It’s weird, all the Poles send money home from London, and I send money back to London because I can afford to save here and I earn comparatively very little.”

No longer down the drain

Poland has long been hit hard by “brain drain”, the trend of young and educated people moving abroad in the hope of finding something better. Around two million Poles are estimated to live abroad, with the UK housing half of them. In 2004, when Poland joined the EU, Łódź was reportedly one of the fastest depopulating cities in Poland. But now this trend is changing.

“For the first time in years we have a net positive migration balance in the 20 to 29 age group – meaning more people are coming to Łódź than leaving it,” said Łódź Mayor Hanna Zdanowska to The Sun.

Because of Brexit, this growth is likely to continue. In the aftermath of the vote, British police reported a spike in hate crimes and Polish people are some of those targeted.

Dr. Agnieszka Bielewska, national identity and migration specialist from the Wrocław Faculty of Psychology, believes more Polish people will now consider staying in Poland. The Polish Government has estimated that 200 000 Polish people will return to Poland because of Brexit. However, these estimations may be optimistic, believes Bielewska.

“From what we know from people who came back before is that they often don’t stay in the country more than three months before migrating again. So they might come back, but also might decide to leave again. It doesn’t necessarily need to be Poland, if they decide to leave, it could also be to, for instance, Ireland,” Bielewska said.

The potential return of Poles from the UK could boost the Polish labour market and help the demographic issues the aging population is facing. But Bielewska recommends the government try to actively attract Poles to come back to Poland.

“The government need to act otherwise these people will end up in other countries,” she said.

With Brexit talks underway, many international companies have begun looking elsewhere in the EU to base their businesses. The Polish government has been quick to react here and tries to encourage such partnerships. Aside from the potential repercussions of Brexit, Łódź is also already benefiting from increased national and foreign company interest.

“After many years Poland is starting to be interesting for big companies. For instance, Amazon and Google were in Wrocław before Brexit. These big companies can offer a lot of jobs. And it’s not just that people are moving into the cities, but also people who could leave are not leaving,” said Dr. Agniezka Bielewska.

In their Polish Cities of the Future Ranking, fDi Magazine, a publication that specialises in global investment, rated Łódź as having the best foreign investment strategy in Poland.

Kasia Korzeniowska attributes the attractiveness of the city to its cheap nature and central location.

The new Łódź Fabryczna railway station has been upgraded and was opened in December, and provides efficient routes to other major cities such as Warsaw, Gdańsk and Wrocław.

Watch to find out more about how the city of Łódź has transformed over recent years (2.43).

The newfound interest in the city has allowed for the creation of higher level jobs. For example, an estimated 30 000 British jobs in the business and service sectors will shift instead to Poland.

Magda Szylberg moved away, as numerous other young people have done before her, and was living in Spain.

After she sent her CV to Łódź, she immediately received five different job offers. Szylberg is now one of the many young people taking advantage of new job opportunities available in Łódź.

“On Facebook you see so many ads for jobs for foreigners. At least people who speak English and another language that isn’t Polish … for all the big businesses that are opening,” Korzeniowska said.

Poland is often known as a country young people move away from and to the west. But Poland itself attracts young people from the east. Yan Kalashnik is one of many Ukrainians who live in Poland. He moved to Łódź last year to begin studying his bachelor degree at the University of Łódź.

“I was attracted by the low cost of education compared to other European countries,” Kalashnik said.

More than 30 000 Ukrainians are studying in Poland`s universities, making up more than half of all international students in Poland.

“The university provided us the special opportunity to study at half of the price, only for Ukrainians.”

In a survey conducted by the Polish National Bank, 69.1 per cent of the Ukrainian students expressed a desire to either permanently work or keep at least a partial professional connection in Poland, while 22 per cent planned to emigrate to other countries. Only 2.4 per cent would like to return to Ukraine. Kalashnik himself dreams of eventually migrating to the USA.

Kalashnik explains that, compared to Ukraine, Poland has greater economic opportunities. Many Polish companies employ Ukrainians on short term contracts. In 2015, Polish employers issued 760 000 short term contracts. The minimum wage in Poland is more than four times higher than in Ukraine. In addition, Poland does not feel far away from home.

“Polish people’s mentality isn’t that different to Ukrainians. People who are coming here are not feeling like foreigners.”

Watch to hear Yan Kalashnik explain why Poland is attractive to Ukrainians (1.20)

Return of a ‘Promised Land’

Kasia Korzeniowska is eating brunch in a hipster-like area called ‘OFF, just next to the main street in Łódź. The area is filled with small cafés housed in an old cotton factory with graffiti art on the walls. Łódź was ranked second on a list of global centres of urban arts, beaten only by New York. This is just one of the ways the city is challenging expectations about Poland.

“The city is so multicultural,” Korzeniowska said. “There’s lots of corporations that have set up here, so they have people coming, mainly from Europe, but also from Asia and Africa.”

“Most Poles are way more open to foreigners than you might be lead to believe by the government and the media.”

In London, Korzeniowska said she could not afford to live in a location similar to where she currently resides in Łódź.

“I have a better quality of life here”.

In the 1820s many immigrants came to Łódź as the village was turned into a modern industrial center. Therefore the city earned the nickname the ‘Promised Land’. Now, almost 200 years later, history seems to be repeating itself and Łódź once again living up to its nickname.

“It turned out to be the best decision I’ve ever made,” Korzeniowska said.