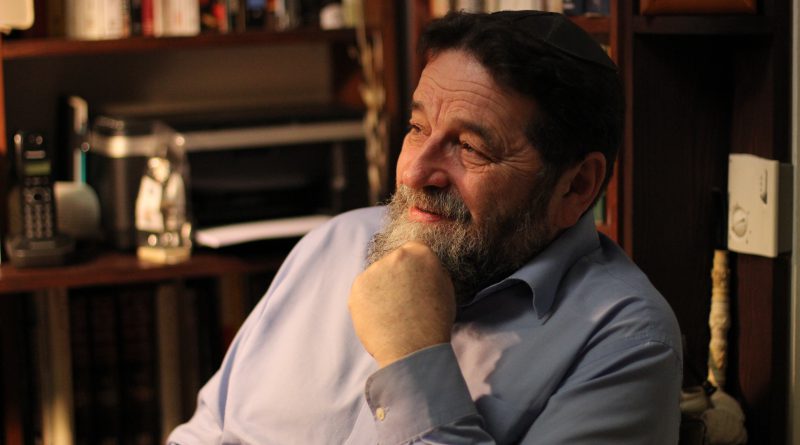 Konstanty Gerbert has worked as reporter, underground journalist, war correspondent and editor for his own newspaper among other thing. Credit: Francisca Velasco.

The freedom of Polish Media is threatened as a new law allowed the government to have more influence over state funded media. Now journalists are accused for lying, viewers divided and overall, much more than just the medias future is at risk.

Almost every wall in the apartment is covered by books from top to bottom. Konstanty Gerbert sits with his cat – the queen of the house – and talks about his passion for the old classic print media. Gerbert has been in the business for a long time and even was an underground journalist under the communist regime.

“I’ve really never expected being a journalist in a free country,” he tells like a grandpa telling stories to his grandchildren.

But it’s not just stories from the old days. Gerbert’s story is also a warning as the freedom of Polish media could again be at risk. A controversial law took effect in January 2016 which enabled the Law and Justice (PiS) government to appoint and dismiss heads of public media and lay down the course of the media. Because of this, Polish media has fallen from 18 to 47 in the World Press Freedom Index.

“Through communist period the governments tried to influence state broadcasters with more or less success. But the takeover of PiS have had stunning results,” Konstanty Gerbert said.

More than 140 journalists have been fired or have left. Everyone is at risk of losing their job, he tells. But it’s not everyone who are worried about the situation. Gerbert tells that there’s a big division in the journalistic circles. “Where you work, identify you politically”, he says.

“The major journalistic organization is enthusiastic as its in support of the new government and therefor its activity. The much smaller journalist association represents journalist who today are anti-government and these two cannot agree on anything. Which of course is extremely deplorable and leads to an even deeper polarization,” Gerbert says.

The division between journalists also reflects the general people, where some are very confident in the Law and Justice Party, while some liken it to old regimes in Poland.

“To be honest, I don’t have any problem with PiS taking over. People says lots of bullshit, acting like the media is not free now and all. When truth is that media is still as free as they were before. The problem is that media in Poland loved PO (Civic Platform, government party before PiS) because they were paying them lots of money. Now with PiS here, they are not getting as much,” said 23-year old Patrycja Godlewska, who recently finished her journalist studies.

“It’s a mix of information and opinions about the situation. Some are fine with it, some are not,” she said.

The firing of journalists has led to a lack of ethics in media, which Konstanty Gerbert is very critical towards.

“The people who replace them are, with minor exceptions, young and not very well trained journalists but with a strong sense of mission and the mission is to present to the country and the world the vision as seen by the ruling party.”

An example on how the media has helped PiS is for instance when a public funded TV station announced that Ryszard Petru, leader of the fourth biggest party in Poland, had been arrested for being a Russian Spy. Only in the end of the program, the audience was told that it was just to show how fake news can be generated, Gerbert tells with a grimace on his face.

Patrycja Godlewska agrees that ethics are not the highest prioritized skill in the journalistic educations in Poland.

“I wish there was more emphasis on ethics here. Sometimes it’s more a “do what you want” type of thing. But it depends on the school you go to and depends on the people that teach you,” Godlewska said.

Aside from the books, a curious collection of small fighter jets from WW1 catches the eye. As the planes, Konstanty Gerbert is accustomed for fighting for a case as he spent eight years in the journalistic underground during the communist regime. He treasures the freedom they gained.

“It is precious. I don’t think it something you can squander away. It was the collective achievement of thousands of people. The journalists, the printers, the distributors the readers,” he tells.

But with the influence of the Law and Justice party, media is losing its credibility. Lies and distrust hurts the Polish democracy and its future. Half a million viewers have left the state funded TV stations for other medias, leaving the country more divided.

“A citizen who says ‘I believe this because I found it at media A and I trust anything media A is saying, but I’m never trusting anything media B is saying, that is not an informed citizen, that’s a partisan citizen.”

Konstanty Gerbert elaborates on what happens when journalists lie (2:41):

Konstanty Gerbert talks about why people still need to be willing to risk (1:05):

One thought on “POLISH DEMOCRACY IS AT STAKE”