In many countries violence in the home is a crime. Yet, recent patriarchal sentiment and Putin’s turn towards strengthening traditional Orthodox family values has meant women’s rights are being left behind.

“When he hit me the first time I was pregnant and expecting a baby from him. He said I was being punished when he attacked me.”

After the first violent assault, nothing happened. Elena spent six good months free from violence, but she was always afraid of his morbid jealousy which turned more and more aggressive, and fear began to take over her life.

Today, in many developed countries it is unquestionable that domestic violence is a crime. Yet in January this year, Russia passed an amendment to their domestic violence policy, decriminalising certain forms of household violence.

Beatings that leave bruises, scratches or bleeding but do not leave lasting negative health effects such as broken bones or concussion will no longer be criminal. If there is a second beating within a year however, the case can be made a criminal one, giving abusers a pass to beat relatives once a year. And the invisible scars of psychological abuse are now completely forgotten under the new legislation.

For women like Elena, who suffered daily torment from an intimate partner, she is no longer protected by the government unless her husband causes serious bodily harm, which is defined as requiring hospital treatment.

The decriminalisation has come at a time where Putin is ramping up efforts to emphasise a strong Russian identity to the world, beginning with strengthening traditional family roles. However, Putin’s ambition to uphold Russia’s powerful patriarchal identity in the face of Western pressure is leaving some of the most vulnerable of Russian society behind.

The backhand of legislation.

In Russia, the statistics of domestic violence are alarming. A 2010 UN report estimated the number of deaths at the hands of intimate partners in Russia at 14,000 per year. Compared to America, Russia has ten times the amount of women killed, in a country with twice the population. Russia’s numbers are anywhere between 20 and 40 times higher than across Europe.

The debate began in 2016 when the Russian government decriminalised battery, the least violent form of assault in Russian statute books. Russia up until this point had no laws specifically targeting domestic violence, treating it like other forms of assault and ignoring the fact that spouses and children are more vulnerable than other victims. But, when the Duma decriminalised battery in June, they decided to exempt domestic violence, instead making it the subject to the same two-year maximum sentence as racially motivated offences.

Many civil-society groups and women’s support networks were pleased that finally tougher rules were imposed, “for the first time in Russian history, domestic abuse was recognised, and we thought wow, that’s really good. They finally stated that domestic violence exists within intimate parameters,” female psychologist and manager of the Crisis Centre for Women in St Petersburg Aleksandra Nazarova said. “But then, nothing happened. Nothing changed.”

On the other side of the debate, the Russian Orthodox church was furious. According to scripture and Russian tradition, the church regards, “the reasonable and loving use of physical punishment as an essential part of the rights given to the parents by God Himself.”

“The government reinforces the Church and Orthodox positions about the traditional family, what is allowed, and rules around traditional women’s roles within it,” Nazarova explained. And making domestic violence a crime, goes against traditional Orthodox traditions.

Traditionalists and conservatives were meanwhile also concerned that parents might face jail time over hitting their children, and many were sceptical of too much government intrusion into families. In a country with fresh memories of communism, where the state controlled much of family life, such sensitivities are comprehensible. Some rational fears of allowing Russia’s corrupt police and judiciary more power over families seem logical when arguments for opposing domestic-violence laws occur.

The biggest supporter of decriminalising domestic violence has been ultra conservative politician Yelena Mizulina. “Battery carried out towards family members should be an administrative offence,” Mizulina said, “you don’t want people to be imprisoned for two years and labelled a criminal for the rest of their lives for a slap.” Mizulina introduced a domestic violence decriminalisation legislation, but it wasn’t until Vladimir Putin became involved after his annual press conference last December that the legislation got traction.

When asked by a journalist if the Russian leader would abolish a law that “allows a father to be sent away for two years for spanking a child who deserves it,” Putin agreed with the reporter, saying, “unceremonious interference with the family is unacceptable.” And further promised to check with the parliament what is being done about the law. Less than three weeks later, the parliament passed an initial version of the decriminalisation bill allowing violence in the home that does not cause serious bodily harm.

Under this legislation, psychological abuse is not considered as bodily harm, as there is no physical damage. For Elena, this meant living with daily threats. “Sometimes my husband would say this sentence that really scared me, ‘I just feel the taste of blood.’ I knew that he would not hesitate to either break my nose or even deform my whole face.” Russia’s interest in non-interference into family lives means that women must live through psychological torment, until the final stages of beatings occur. 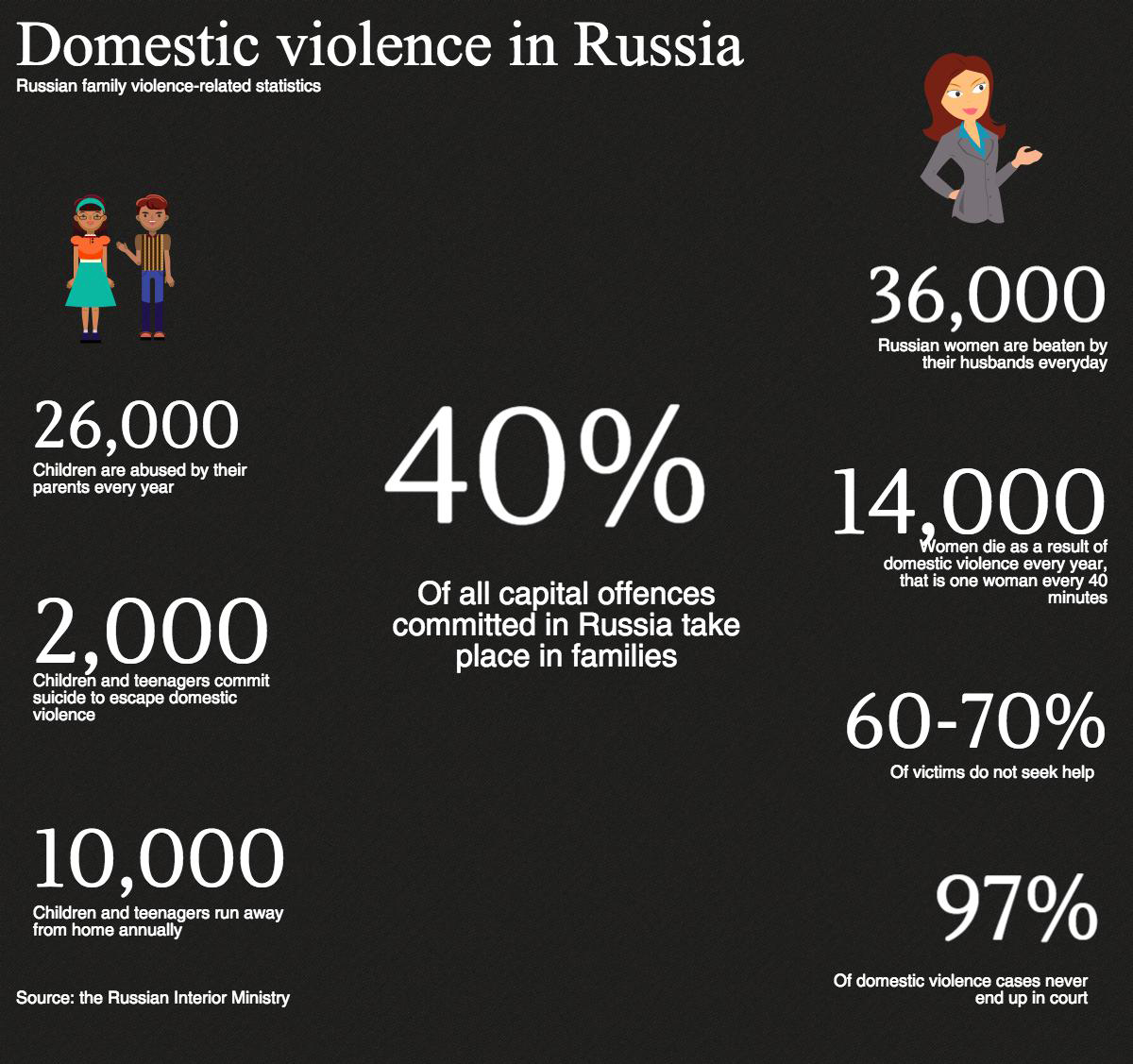 This is a man’s world

Tolerating abuse fits the Russian governments politics towards the traditional family ideals. With no formal governmental organisations to help victims of domestic violence, women rely on NGO’s and grass-roots initiatives. Nazarova says the Crisis Centre for Women tries to keep in contact with governmental social services, who are supposed to help violence victims. “[Russian] government politics are focussed towards a traditional family, and the women should more or less follow those politics. The government would insist that the woman should find a common language with the man, and the government is more oriented to save the family, not the woman.”

According to Nazarova, Russia is moving back towards traditional values and women are being left behind, “I don’t want to believe it, but I have to believe my eyes and on the governmental level we are returning to a patriarchal structure.”

“Violence is a common society problem. What our government does provokes this behaviour, because if we look at look at the wider context we can see this decriminalisation law became possible after a recent sequence of patriarchal sentiments raised in Russia.”

Nazarova explains these patriarchal sentiments stem from Russia’s war actions against Georgia and Ukraine, raising societies overall view of violence and masculine concepts of militarisation. “If we see men as those who are traditionally masculine, then within this conception violence is a part of their nature.”

Male psychologist and domestic violence specialist, Stanislav Khotskiy believes that domestic violence is a huge world-wide problem, but agrees patriarchy plays a significant role in causing violence. Khotskiy explains how this has been reflected throughout Russian history where certain spots of soviet past have made Russia stick to patriarchal traditions longer than other European countries.

“From 1917 till middle of 90’s was very cruel and violent period. Men were forced to be resolute. Plenty of them, or even all of them were traumatized, therefore couldn’t create some equal relationships with their wives and children,” said Khotskiy.

“Times have changed, but faster than people do. People need more time to change their mind and social structure. It is like when we are talking about teenagers. Their psyche doesn’t keep up with a body until they become adult. I think that in relation to violence issues, Russia is a teenager yet.”

When the system is against you.

A 2010 UN report states the most effective weapon in combating violence against women is a clear demonstration of the government’s political will. However, Russia’s federal government still does not recognise the importance of such work. Despite the work done to combat violence against women in Russia over the last 20 years, a systemic approach at government level does not exist. Law enforcement officers still do not regard such violence as a serious crime, believing it rather to be a ‘private matter’ which belongs to the family sphere, or a personal problem of a particular woman.

“I remember the first time when I started talking about divorce, he threatened my mother, my children, and I with violence in response,” Elena says. At this point, Elena went to the police with her mother. They were told to solve their family problems themselves.

“The main challenge is actually that the police don’t work correctly,” said Nazarova, explaining that compared to European counterparts, Russian women do not have the luxury of calling the police. “It does not work the same in Russia. The police usually won’t accept the woman’s application, because simply they don’t want to do it, and the police will never have troubles from ignoring a [woman’s] application.”

The Russian system is so complicated that 90% of filed cases are dismissed for technical reasons, and only 3 % result in criminal convictions of any kind. In Russia, statistical data on crimes of domestic violence against women is fragmentary, difficult to obtain, and often simply non-existent.

At the end of February last year, Elena finally told her husband she would divorce him and move out. Later she found out he had killed Elena’s ex-husband. “The final judgement of the court against him was not murder but only ‘heavy abuse of self-defence.’” During this whole period, the legal experts and psychologists at Crisis Centre for Women helped her. “I don’t know what I would have done without their help.” Today Elena is better, but is still scared her husband will find her after his short prison sentence. She is afraid that she won’t be able to protect her children.

As for the future for women’s rights in Russia, Nazarova is unsure. “Of course we believe it will change, I don’t know how soon, but we try our best to make something real and change the situation. There is more support and media campaigns advertising information than ever before. But without initial understanding, I’m not sure it will work. It will work in schools if such groups could exist. But as far as we know nothing like this has its place. Not in Russia.”

*Elena’s story was part of an exhibition at Fotografika Gallery in St Petersburg, showcasing collages and where women shared stories of violence on the 8th March 2017.