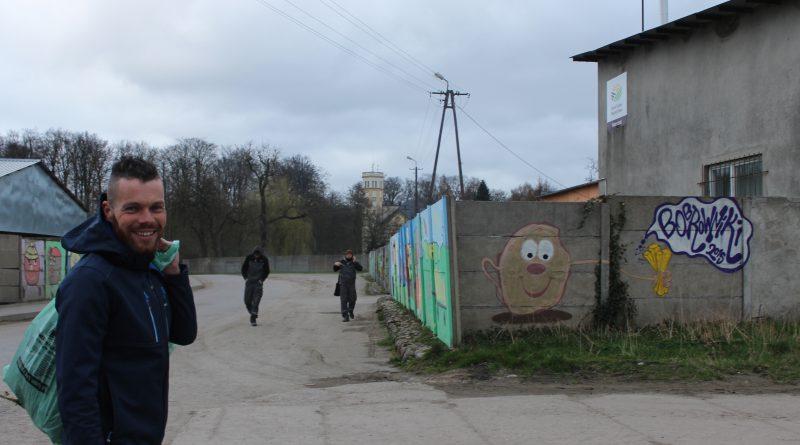 After the Law and Justice Party (PiS) came into power in Poland, the LGBT+ community has experienced even more discrimination than before. Yet, one of the country’s regions, Pomerania, seems to be defying all odds when it comes to tolerance and acceptance of this persecuted minority.
FRANCISCA VELASCO

He is a gardener, a substitute teacher, a Mayor (or rather, Sołtys in Polish) and a husband to another man.  Łukasz Włodarczyk has lived in the small village of 700 people, Bobrowniki, for about ten years. But he has only been his true “happy and free” self for half of that time after he finally came out to himself and those around him.

But how could an openly gay man be elected mayor of a village in a country with such a tough climate for LGBT+? Especially a country that was ruled the third worst EU country to be gay in after Lithuania and Latvia by ILGA-Europe, the European Region of the International Lesbian, Gay, Bisexual, Trans and Intersex Association. According to them, the climate around LGBT+ has gotten worse over the past two years, around the time when PiS was elected.

During a walk through Bobrowniki, villagers stopped and greeted Włodarczyk while going about their business. Everyone knows each other, and everyone, but one, voted to elect him mayor. One would question who this person who voted against him was.

“The guy running against me of course,” Włodarczyk laughed.

And yes, the entire village had already known about Włodarczyk’s sexuality and relationship with Łukasz Ciężadło prior to the election. Since it is not possible in Poland, they got married in Edinburgh a couple months before on October 21st, 2016 and then celebrated with their friends back home in the village.

Włodarczyk points to a small dining hall, Milano, right next to their only market in the village.

“That is where we had the wedding party a week after the ceremony.  About 40 people came. There had never been a party anything like it in my village before.”

Just because their marriage has been accepted amongst the small village, does not mean that their marriage is recognized or even tolerated by the rest of Poland.

Magda Świder from Campaign Against Homophobia (KPH) spoke about a new practice being performed after the Law and Justice party (PiS) came into power. Same sex couples who have been married outside of the country are currently being searched for, and a reason has not been given as to why.

“What the Prosecutor General did was send a letter to all of the civil offices in Poland requesting all of the data of people who want to register their same sex marriage in Poland.” Świder said.

“Now in Poland, PiS is a similar situation like in Russia. The government sent letters to public prosecutors that these prosecutors have to look for people like me and Lukasz find out why we wanted to get married. It’s amazing. But only couples who asked the community office for the transcript or certificate could be caught, and we didn’t ask for this, so they don’t know about us.” Włodarczyk laughed.

“Yeah, but they know. I mean we are on the TV,”  Łukasz Ciężadło interjected, “they want to scare us.”

“Yes, and the community of LGBT,” Włodarczyk continued.

Magda Świder from KPH confirmed the couple’s sentiments when she said, “This decision coming from the prosecutor general is kind of a message to LGBT who are married or want to be married, that you are being watched. Watch your back, because we know what you’re doing.”

With the current homophobic government and occurrences like these heating things up around the LGBT+ community, one would assume it should be hard for any person identifying themselves as such would find it hard to obtain any kind of political power. It turns out that there is actually one area in Polish Law that protects LGBT+ rights.

“Only piece of legislation that sexual orientation is named in is the labor code,” Świder said.

The Labor code lists a number of minorities that are protected from discrimination in the work field, and LGBT+ has claimed a category. So the openly gay mayor was free to run without persecution.

But anti-discrimination protection does not make you more popular when running in an election. This is a unique place compared to the rest of Poland.

“This village is a typical Pomeranian village… And of course our village is like no other in Poland,” Włodarczyk explained.

This region, Pomerania, is different compared to its other 15 neighboring regions. Within Pomerania, the only three openly gay officials in all of Poland to be elected into any form of politics reside here: Marcin Nikrant, (Mayor of village Leśniewo,) Robert Biedroń (President of city of Słupsk,) and now Łukasz Włodarczyk.

“I would say this is a very progressive area,” Danuta Nawrocka, Orthodontist and friend of Włodarczyk said. Nawrocka resides in Słupsk where President Robert Biedroń has been in office for over two years.

Włodarczyk has been tending to Nawrocka’s garden for about five years now, and she claims he is a “really good man.” While he trims her roses, she describes Pomerania and Poland’s current political climate over a cup of tea.

In 2014, Nawrocka voted for Biedron to govern her city, but claims that she felt like she had no choice since he “went against corrupt man.” According to her, his sexuality does not matter and not the reason why she felt she had “no other choice.”

“I do like him. Your private life is private and your own choice, but he didn’t do the things he said he would,” Nawrocka explained.

When speaking about the new government Nawrocka said, “I love PiS, they are doing good things. People think superficially. But PiS thinks about Polish values and nationalism, but not the negative side of nationalism, back to our roots. Media gets it wrong and only talk about their politics, not Polish politics. Poland is unique and needs to be preserved.. I’ve never spoken to Łucasz about his views I wonder what he thinks but everyone has different views”

Yet, her surrounding neighbours seem to contradict her beliefs. Pomerania was the only out of 16 regions to vote against PiS in the last election.

“I would say that western Poland is more open and tolerant, more left-winged as well,” Julia Anisko, non-binary genderqueer based in West Poland.

“For me [PiS] is big shame for people in Poland and for Europe.,” Włodarczyk said.

“They [PiS] are against LGBT… but PO (the Civic Platform Party) is also, but they at least felt ashamed of being against LGBT. But PiS says it in your face. They do not hide anything,” Łukasz Ciężadło added.

“I hate PiS… Many will laugh at my fear and say I am overreacting. But in their Catholic and patriotic eyes, I am one of the biggest sins ever,” Julia Anisko said.

Right around the time when PiS was elected, things started to go south for the LGBT+ community. The annual report done by ILGA-Europe read: “negative rhetoric and opposition to LGBTI equality became more apparent over the past 12 months.”

“It’s been getting worse between 2015 and 2016. We were victims, people in the office.”  Magda Świder has been working at KPH for five years, and in the span of two months last year in March and April, they had experienced three attacks.

“One was people trying to get into the office and shouting homophobic things. Thank God we have strong doors that can hold them.” The other two incidents consisted of windows being broken each time.

“For us it was a big message. That was 6 months after the newly elected government [came into power] so we see the direct link. This new government approaching minorities and using a lot of hate speech as well, so people feel more secure to do things they want to do.”

Among physical violence, verbal attacks have also become more violent. Świder claims that their Facebook page received more hateful comments than ever before right after PiS came into power.

“I think there is more acceptance for violence now, even if it’s just hate speech, it’s still more of an acceptance and more prominent everywhere.”

Yet in the peaceful village of Bobrowniki, within the “progressive” region of Pomerania, Łukasz Włodarczyk experienced the exact opposite of what he expected after being anointed his new title of the “next openly gay mayor.”

“When you looked at Biedron’s (President of Słupsk) Facebook before, it was full of hate and threats, about 80%. I expected the same for me, but mostly received support and those who did say something negative were then attacked by 10 other people telling them they are wrong,” Włodarczyk said.

But those were the least of his concerns. The media was drawing a lot of attention to him, his husband, and his village.

“Now people know exactly where I live. Which Bobrowniki and what city it is next to. It is not hard to find me in a town of 700 people. I was afraid of people coming to harm us. But it’s been so many months and we haven’t had anything happen.”

During the same time local papers were printing out articles with Włodarczyk’s face plastered all over them, he was substituting for a grade school class. He was nervous of what the children would ask or what they would think now that they knew.

Questions they asked, judge they did not. This was evident when he was stopped by a group of quizative children when cutting through the playground during the stroll through the village. They were eager to see what he was up to.

They were just curious, since it was something they had not seen before. But like I said, kids are the best at understanding, not set in [their] ways yet.”

Which is partly the reason why he ran for Mayor: “to help the community and the people in the village, to do something new for this village because usually villages like this, the Mayors are older people. But I think younger people have new ideas and can do something interesting and new.”

“When you see people like me and Robert, and the men in situation like me before see that we can live normally, we have families, and have a house, I am Mayor and Robert is the President nobody has a problem with this and we all live normally. So I think a lot more people will be brave and be open.”

Since becoming Mayor, Włodarczyk has become somewhat of a symbol of a normal homosexual life. Messages have flooded his Facebook about the inspiration he has stirred in showing that a homosexual man can be “normal”, Instead of the stereotypical gay man the media usually portrays.

“Oh my.. no, oh maybe not a symbol, I don’t think so. I told you that we wanted to live normally, like everyone else in Poland. I don’t know, look,” addressing husband, Łukasz Ciężadło,  “are you a symbol? An LGBT symbol?” Włodarczyk asks.

“Ok yes, maybe for people I am a symbol, because I told you many people send me messages it’s amazing what we have done, we have done more than LGBT parades and…”

Ciężadło interrupts laughing: “He is number 81!”