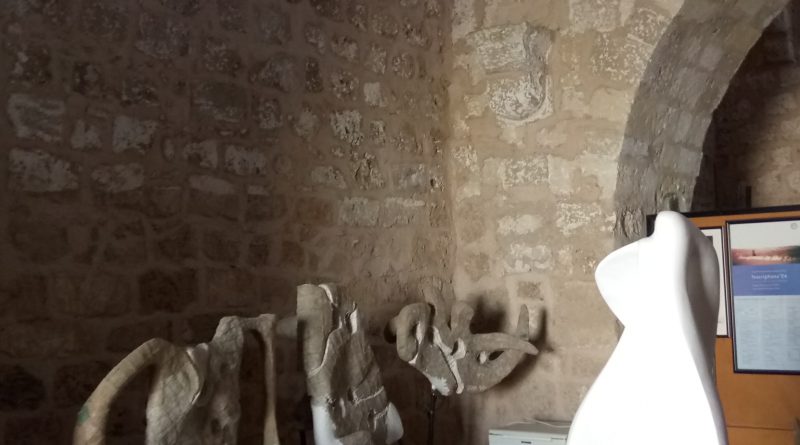 How could two artists, a Turkish Cypriot and a Greek Cypriot, who had never met become “brothers in art”? This is the inspiring story Paphos 2017 has chosen to illustrate how art can gather communities in a divided country.

“My sculptures are like my flesh and bones and I started thinking, if I had to leave my children behind, just to save my life, how would I feel?” With his trembling voice, Baki Boğaç, a Turkish Cypriot artist remembers the immediate connection he felt when he first entered an abandoned studio after the Turkish annexation of Northern Cyprus in 1974. There, he discovered some sculptures of Andy Hadjiadamos, a Greek Cypriot forced to leave his house in the Northern part of Cyprus after the fragmentation.

Without any hesitation, the passionate Baki Boğaç dedicated his life to bring back the work of art to his counterpart from across the border. “If you create empathy towards those feelings and if you are a human being, there is no any option other than saving those art works and sending to the owners,” said the 66-year-old man.

To honor the artist’s tenacity and to prove that art can build bridges across cultures, Paphos, the very symbolic European Capital of Culture 2017 is presenting an exhibition, story of two artists, divided by an artificial border, connected by a firmly political idea of art.

“We wanted to highlight history and hidden places,” Gloria Doetzer, art programme director of Paphos 2017 said. Creating a common exhibition was then the right way to capture the story of Baki Boğaç and Andy Hadjiadamos. “A kind of tribute and thank you to Baki Boğaç” as Yiannis Sakellis, the event coordinator summarized it.

Their paths first crossed in 1976. At the time, Boğaç was an employee of the Famagusta planning department. While in charge of the documentation of the abandoned Greek Cypriot properties, he discovered Andy Hadjiadamos’ studio in Varosha. Witness of the conflicted past of Cyprus, the story of Baki Boğaç caught the attention of Georgia Doetzer.

Aware of the uniqueness of Paphos as a European Capital of Culture, Georgia Doetzer thinks that this year, Cyprus has to use culture, “not to show the pain of its past but to show what we have in common”.

People can be “brothers in art”, as Yiannis Sakellis likes to say, even if they belong to different communities.

The ‘brotherhood’ was born in the ashes of the war. In 1974, Baki Boğaç observed the division of his island from Istanbul where he was studying architecture. Viscerally attached to his motherland, he left, in 1976, the brilliant future he had ahead him to come back to Cyprus. “My country needs me” the architecture student and part time artist said at the time to his teachers offering him a job of teaching assistant. He declined in spite of the criticism and skepticism his decision had stirred up. “I’ve been told ‘you’re stupid’”, as he said with a smug smile.

When he arrived in Famagusta, from this time city of the Republic of Northern Cyprus, the unrecognized Turkish side of the island, the architect realized the consequences of the division, especially in Varosha, a closed and forbidden area within the buffer zone. The formerly full of life beach resort had turned into a ghost town where life seemed like frozen.

Ceren Boğaç, the artist’s daughter and architecture’s lecturer at the Eastern Mediterranean University of Famagusta has followed the decay of those empty houses from the forbidden area of Varosha her whole life. “Every year with my brother we were looking at the tree growing in one of them. Curtains were falling down, furniture were tearing apart. It became a jungle at the moment, people left everything, when they were having a breakfast, they ran, you can see cups, children toys, clothes, everything is still there,” she explained.

Andy Hadjiadamos, lived in Varosha and like all the Greek Cypriots living in the northern side of Cyprus, he had to move in one day without anything, neither his personal effects nor his work of art. These displacements are still an open wound for Cyprus. The artist’s daughter analyzed it. For her, the place attachment is part of the Cypriots life. “If you’re asking to a Famagustan refugee in the South, they will always say they want to come back”, the lecturer affirmed while drinking a Turkish coffee. Never feel like home and worse, always fear that the owners will come back is still a reality in Cyprus.

Baki Boğaç admitted feeling the presence of those ghosts from the past. And this is true that an incredible echo resonates in his stone arched studio in the Venetian center of Famagusta. “The place was first a chapel, then it became a prison, and after years as a storage room, I bought it,” the artist said proudly. Even if he doesn’t work in Varosha, where he discovered the sculptures, he confessed that sometimes, when he is working alone he can feel Andy Hadjiadamos spirit. “I’m working with too much energy, he is with me”, he said about his artistic alter ego.

This unique connection is surprising because the Greek Cypriot died before he could meet the Turkish Cypriot artist. But according to the latter, talking wasn’t necessary to understand each other’s vision of the world. “When you want to tell a story you use words, but you tell a different story with the sculptures as well, so when I saw the sculptures, I understood the story behind and I knew that I needed to return the sculptures to the owner.” Boğaç said.

A treasure in a basement

As the title of the Paphos 2017’s exhibition, Risky Travels, dedicated to Baki Boğaç and Andy Hadjiadamos suggests it, to give the art works back to the Greek Cypriot’s family required time and some risks.

Back in the 70’s, crossing the border was forbidden, so the sculptor from Famagusta collected everything he could and kept it in his basement for more than 10 years. “I didn’t know anything about Andy, I just knew his name from the signature on the work of art”, Boğaç told “and I knew that he was famous because I saw this name in a catalogue”. But how to find him and above all, how to meet him across the forbidden border?

The key appeared from across the Atlantic Ocean, when the first joint exhibition of Greek Cypriots and Turkish Cypriots was organized in 1993 by the American Centre in Nicosia. At the opening of ‘Brushstrokes across cultures’, “we first were observing each other and progressively discussed about art and we soon realized that we were talking about the same things.” Boğaç remembered.

‘Brushstrokes across the cultures’ was the very first time Baki Boğaç could talk about his discovery and ask for help to find the artist. The ambassador of culture, inspired by the attention, she investigated and finally found Andy Hadjiadamos family. More than 20 years after, the work of art was finally sent back in Paphos, where the family opened a restaurant. “They thought it came from heaven”, Boğaç emotionally narrated. Indeed, the package was delivered without any mention of the sender.

“All kind of art is politics”

In Cyprus, probably more than anywhere, art has the role to play to bring communities together. This is one of the reason why Paphos 2017 decided to present exhibitions from Turkish and Greek Cypriots. “We want to present both culture as one culture”, art programme director, Georgia Doetzer explained. Paphos 2017 wants to establish a dialogue through art. To illustrate her words, the dynamic woman pointed at a symbolic table made of messages from both sides which takes a center stage in the garden of the Paphos 2017’s headquarter.

When Baki Boğaç and Hadjiadamos family could finally meet each other in 2003, after the borders were opened for the population and the secret sender revealed, “they just hugged and started crying”, as Ceren Boğaç, Baki’s daughter remembered. “They love my father like their real father”, she added.

The symbol is strong, especially for the Turkish Cypriot artist whose art is very influenced by the importance of living together in Cyprus. In his cold and dark studio, the sculptor keeps some of his art. Most of them represent his beloved island.

“Here is a balance like the ones used by the house builders, without this tool, you can’t build anything, just like in Cyprus”, he said presenting his work. Another sculpture speaks for itself, it is an association of a Muslim crescent and a Christian cross made of iron and sitting on top of press made of stones and wood. With his inspiring words, he explains that it symbolizes the need for both communities to work together for the country.

“The most humanitarian thing for a person to do is art. I’m telling many stories through my art work”, Baki Boğaç affirmed.

And before a further political agreement, art is the solution chosen by the European Union to gather communities in Cyprus. “What we need is openness”, art programme director of Paphos 2017 Gloria Doetzer said.

Looking forward to the future,Baki Boğaç expressed with a hopeful voice : “let’s go, trying to change everything for the best of Cyprus”.