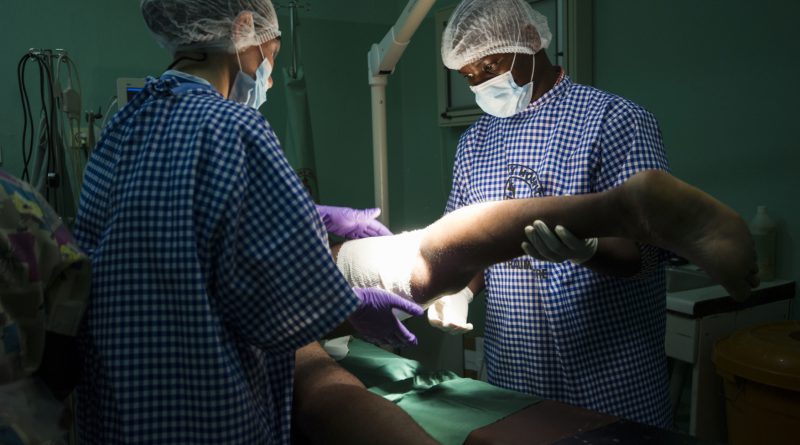 Even though Romania struggles with a huge deficit of doctors, the South-Eastern European country misses out on a source of foreign doctors that can fill up the gap. Even with a Romanian degree, non-European migrant doctors cannot get a license to practice.

Adam A.M. Srahneh is a young Palestinian medicine student who has a scholarship to do his education entirely in Brasov, a city in the geographical heart of Romania. He decided to do so four years ago, because of the low-priced tuition and cost of living compared to these in Israel. With a scholarship from domestic government and accommodation offered by the Romanian government, Adam is still planning on leaving Romania for Belgium when he finishes his degree.

Shrahneh is not the only one in this situation. According to a declaration of the former president of College of Physicians four years ago, around 300 non-European migrants graduate in Romania each year. “It’s all a bit silly”, explains Luciana Lazarescu, researcher for The Research and Information Centre on Immigrant Integration in Bucharest, “The Romanian government invest in his education, and then, they let him go because the law said so.”

To be able to apply for the license to practice in Romania, you have to prove to the authorities by registering at the Romanian College of Physicians, that you have been living in the country for five years, or you should simply marry another Romanian citizen.

However, the country shows their hospitality by welcoming refugees through EU’s relocation plan, Romania’s public opinion have shown a significant increase of intolerance to refugees and migrants. A share of these refugees and migrant are now being forced to head further to the west or the bordering countries.

Due to the outflow of young Romanian doctors, the country could have used these foreign national doctors to shorten the long waiting queues in the hospitals. According to a report from the Romanian College of Physicians, Romanian hospitals should have had 26 000 active physicians in 2014, but had just 13 521 doctors, where only 407 of them were under 29 years old. The active doctors in their thirties only count for less than thirty percent of all active doctors in Romania.

Even though the authorities call it an inequality of the distribution of physicians between the urban and rural areas rather than a deficit of them, this trend of leaving doctors only seems to go up. In the early nineties Romania’s healthcare system consisted out 55 000 physicians, whereas in 2014 only 37 363 – 68 percent – of them were left. Today, there are less than three doctors per one-thousand people, the second-lowest rate of all the European countries, Poland having the lowest.

Several NGOs dealing with migrant integration throughout Romania are highlighting this issue of this non-European national doctors who cannot be integrated in Romanian healthcare sector. Stefan Leonescu is a legal consultant for Jesuis Refugee Service (JRS), a Bucharest-based NGO. He calls this a form of marginalization, because these migrant doctors get excluded from the labour market.

“For the time being, there are legal provisions set up by the national authorities that are avoiding refugees or migrants to work. If you are a doctor who finalised his studies here in Romania but you are not a EU-citizen, you cannot work in a hospital”, clarifies Stefan Leonescu.

“I think this is marginalisation, so it’s our job to fight against this. Now, they are just forced to leave the country due to the lack of legal assistance whereby they can’t do where they have been studying for. Lots of the migrants that got their diploma here just go to Hungary to get employed.”

Adam, the young future doctor from Palestine, is one of the marginalised people according to Leonescu’s point of view. As soon as he arrived in Romania he participated in the language course that were provided by the government. It took him only three months to get the basics of it in order to be ready for the start of the semester at the medicine university in Brasov.

“I remember that my first year in university was extremely hard. Participating in the Romanian medicine course was, because of the new language, not that easy. But, because I just kept on going to school, I learned every day and night. And now, I can say I speak the language fluently.”

Even though Adam Shrahneh is doing his medicine degree in Romania and is master of the language, there is not much future left for him here. “The place where they have graduated has nothing to do with the right to practice in that country”, states Luciana Lazarescu, researcher on immigrant integration, “Up until now, the right to practice is just not applicable for non-European citizens who did their degree in Romania.”

Foreign medicine students, who are doing their education entirely in Romania and have to live there for more than five years, have a student visa. After the expiration of the visa and their studies they will be sent home, again. Or, they can apply for another visa to extend their stay, but no one can under any kind of visa apply for a long term residence permit even if they have lived in Romania for more than five years.

In 2007, The European Union established the Blue Card, which was supposed to make this procedure smoother for well-educated migrants from out of the Europe, like Shrahneh. The blue card has the equal value as a work and a residence permit, which is intended to pave the way for a permanent residence in Europe, and should ensure an equal loan like their native colleagues.

The Blue Card, which is issued by the Immigration Office in Bucharest, requires three conditions: a certification proving you’re educated or skilled, non EU-citizenship and a work contract.

For the migrant doctors in Romania the third requirement is the issue. Because they can’t work as long as they don’t have the permission from the authorities. On the other hand, you need to have a Blue Card, which is a legal equivalent of the long term residence to get the license to practice from the College of Physicians.

“It’s an issue between the Romanian College of Physicians and the Immigration office,” concludes researcher Luciana Lazarescu desperately, “One of them should give up one of their conditions, because migrant doctors just end up in a dead end.” 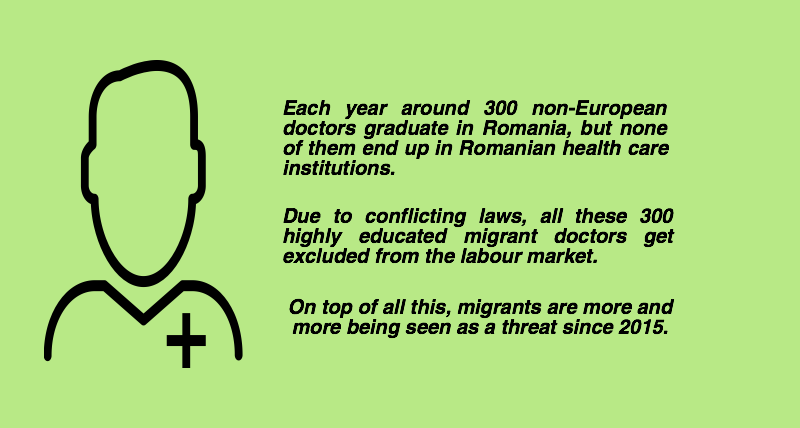 It’s getting even worse. If this bureaucratic struggle between these two institutions ever get solved, that wouldn’t even mean the skilled migrants’ future will get any better. As the Blue Card should guarantee equal payment for these educated and skilled migrants, the European Union decided upon a minimum wage their employer should give them.

“These salaries are just too high for every medical institution, even the public ones. So, that means that you end up in this endless circle, where you can’t get out because no one will provide this high wages to anybody”

“The College of Physicians is in my opinion quite an elitist and racist group,” explains Luciana Lazarescu, “They are like a cast. They protect their group from outsiders, and usually they consider themselves above all. They consider the foreign doctors very poor prepared compared to the Romanian doctors. Even though, they have studied in Romania, you know? This is just non sense.”

Even in the universities, professors don’t assess the foreign medicine students as they assess the Romanian students. “The professors think they are going back to their home countries, anyway”, says Luciana, “So, why should they invest time in them?”

“That’s why professors are more tolerant towards foreign student during the exams and practical exercises. They are just closing their eyes, in order to get rid of them as quick as possible without any headaches.”

Until recently, xenophobia wasn’t really a problem in Romania. The Romanians’ attitude towards immigrants was rather favourable, and certainly more favourable than their attitude towards Roma people. But, from 2015 onwards with the terrorist attack in Brussels and Paris, the people’s mind has changed.

“Prior to April 2015 in the Romanian media one could barely find an article about migrants or refugees, explains Lazarescu, “but, after Romanian accepted the refugee quote, the media blow up with news presenting for the worse and exacerbation the negative opinions towards refugees and migrants.”

“They did such a harm, that even the young people who proved to be tolerant turned into perceiving migrants as a threat.”

The rising intolerance and the all these contradictory laws for foreign doctors, makes Shrahneh start planning to move out to Belgium after his degree. While the waiting queues in the hospitals getting longer and longer.