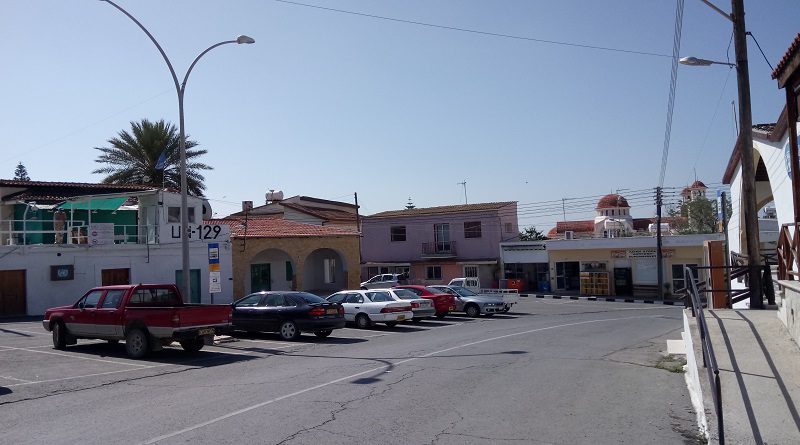 Pyla, the only place in Cyprus inhabited by both Greek and Turkish Cypriots, sets an unordinary example of how ordinary life together is. With reunification talks on the go, international attention is directed towards Pyla to investigate if its model could be multiplied for the rest of the island.

Pass, hearts, trump suit! Deep voices echo from within a typical Greek white and blue tavern, called “Makedonia”. Visitors of Pyla are drawn to the small restaurant, welcoming everyone from the middle of the central square. An old-fashioned TV box speaks in Greek from a corner inside, until someone changes it for a Turkish channel and then back to Greek. Laughter erupts when a few men start quarrelling over who gets the points from this Belote round.

Results from the card game are written down in a wrinkled notebook, containing points from hundreds of rounds. Although two couples usually have to play Belote, in Pyla the games form a beehive and attract both Greek and Turkish Cypriots to play.

After spending 10 days travelling around divided Cyprus, it is refreshing to see such a united environment. Trying to put some words in a simple question how life together is possible, a teen girl shrugs from the other table.

“We are here for the sandwiches.” Saren Dogalcan answers while taking a big bite from the Haloumi bread. She starts a conversation by introducing herself only as a Cypriot. This is how she was raised in Pyla, stressing on why this village is so different from the rest of the island. “Everyone here accepts the other,” Saren concludes matter-of-factly.

Pyla is this quirky small village in the middle of a buffer zone – no man’s land between the Republic of Cyprus and the unrecognized internationally Turkish Republic of Northern Cyprus (TRNC). Between the two republics, life in Pyla goes on its own pace, uninterrupted by the hopes and fears shaking the rest of Cyprus for the last 43 years of division.

Today, when reunification talks seem to be at a climax, eyes are pointed towards Pyla. “Two days ago two other journalists came over and they asked me about how I can live with Turkish Cypriot and everybody knows I was born and I live with them and this is stupid.” Pyla Community Council Vice-president Andreas Kasenides expresses his irritation.

Because it is as simple as that: life in Pyla is normal, from the church and the mosque facing each other, to the Greek and the Turkish café one after the other and the UN post guard in the center. Everything fits weirdly into a puzzle, making the village as ordinary as every other village in every other country and at the same time making it an extraordinary example for the whole of Cyprus.

“We are together,” Mr Kasenides points towards a man passing by the table. The new arrival stops and greets us in Greek. Mr Kasenides introduces him as Berpis, a Turkish Cypriot and a friend, while offering Berpis his own cigarette. After a puff, Berpis moves to the Belote table. He doesn’t want to add anything to his friend’s answers about life in Pyla.

“You [Mr Kasenides] say everything about what we believe,” Berpis shouts from the other table. “No problem here.”

The game of Belote keeps on pulling in the few people seen on the streets like a magnet. The only human being outside is a single UN peacekeeper occupying his post. His binoculars stay firmly in the direction of a Turkish military post, lurking over the village from the top of a hill.

This picture hasn’t changed since the conflict of 1974, when the Turkish army occupied north of Cyprus and stopped only three kilometers from Pyla – on that same hill.

“When the war started…the whole village decided to go together in the British base where they lived for months in tents and they stayed together. The war finished and they came slowly to the village. The Turkish army told the Turkish Cypriots not to go back because the Greeks will kill them but because they were together in the tents they all came back.” Pyla-born Maria Antoniou shares memories and family stories, highlighting the uniqueness of Pyla.

One of the main worries about reunification south and north of the UN border, butchering Cyprus in two parts, is how to reach an agreement over a shared administrative system. But Pyla already practices as a successful federation with two mayors, or “Mukhtars”, representing both communities.

“In Pyla I don’t mind to say that this system is working because both sides and both Cypriots’ interests are protected and there is respect for the system and it is power sharing to its fullest. If rights are protected and guaranteed somehow, then why can’t we live together?” the Turkish Mukhtar Enver Nejdet wonders.

“Pyla is just a small example, if there is some problem, we discuss between us and the Mukhtar [Greek mayor] and the other Mukhtar [Turkish Mayor] and we find a solution.” Andreas Kasenides agrees with one of his leaders. Born and raised in Pyla, he can’t remember the last serious problem they had. “Maybe never.” Mr Kasenides notes.

But because the system is working smoothly, it is also often given as an example in high-diplomacy meetings about a future reunification of the whole island. The Greek Mukhtar Simon Mitides feels used by the government of the Republic of Cyprus and makes a point why his name should not be used as a reference to the whole island. What everyone fails to acknowledge as a fact according to Mr Mitides is that the village has been like this for many years and it is the only way people know how to live.

“You cannot treat Pyla if you are the main state as the rest of the state because we are unique. They always use Pyla as a good example for Cyprus solution.”

Working as a federation does come with its consequences, Law professor from University of Central Lancashire in Cyprus Dr Klearchos Kyriakides summarizes. He sees important exceptions from what seems like a “complete picture of integration”.

“On the face of it [is] an integrated society and that is very much to be welcomed but what the people here have inherited without them having any saying in it is the segregated school system.” He discusses.

Prof. Yiannis Papadakis from the University of Cyprus agrees and believes that due to their common history, people in Pyla are able to “live together separately”.

In Pyla, children go to a Turkish or Greek school, they drive cars with different plate numbers and when there is a crime, it is the UN who has responsibility over the investigation with Turkish or Greek Cypriot policemen if needed. Yet, “Pyla is just the one example that is left so Pyla could be the example that we can still do that, living together is not a problem and shouldn’t be one.” Diplomacy lecturer at the University of Central Lancashire in Cyprus Zenonas Tziarras defends the village.

A question for the people

It is 5pm. The players circling the Belote table have doubled but instead of following the game, they are taking their daily portion of politics. A common annoyance amongst the villagers turns out to be how big powers meddle in Cypriot business. Even young Saren understands the frustration around the international interests.

According to the Turkish Mukhtar it is important to make progress everyday, but “Greece, Turkey, Britain and the USA they have interests” and instead of moving forward as Cypriots would like, the talks for reunification move backward and “you don’t achieve anything”.

“Everybody plays with us, nobody cares about the people. The big powers don’t leave us to be together.” Pyla Community Vice-president Andreas Kasenides expresses his disappointment.

Pyla doesn’t follow a recipe for peaceful co-existence. Villagers here have walked a long path since the ethnical conflict of the last century. The Turkish Mukhtar Mr Nejdet remembers the time before the division of 1974. He was still doing his mandatory time in the Turkish army when often he would find himself at a gunpoint with armed supporters of Greece. Hiding around the main square, all waited for the single shot to come out.

But suddenly, Mr Nejdet changes the dark tone of memories with a happy thought of how last summer the same square welcomed a festival where more than 3,000 Greek and Turkish Cypriots drank, ate, danced, and sang together.

“What we want? We want to forget the past, we leave the past somewhere and we look to the future and there never should be domination of one side or the other.” The Turkish Mukhtar notes and smiles hopefully.

The day is coming to an end. Saren Dogalcan, the proud Cypriot girl, shares one last thing. It will be her first bicommunal dance practice in a couple of weeks. “When I heard the song, I thought it was a Turkish traditional song, but the lyrics were in Greek. It is the same rhythm.” They will perform this dance at this year’s summer festival.

And as life in Pyla continues at its own pace, it inspires the Turkish Mukhtar, helping him stay positive about reunited Cyprus:

“People start to realise that this island is not a Turkish property or Greek property. It is Cypriot property. When the British and the French fought, it took them hundreds of years but they are friends now, so war can’t last forever. We will see peace one day. It is as simple as that.”