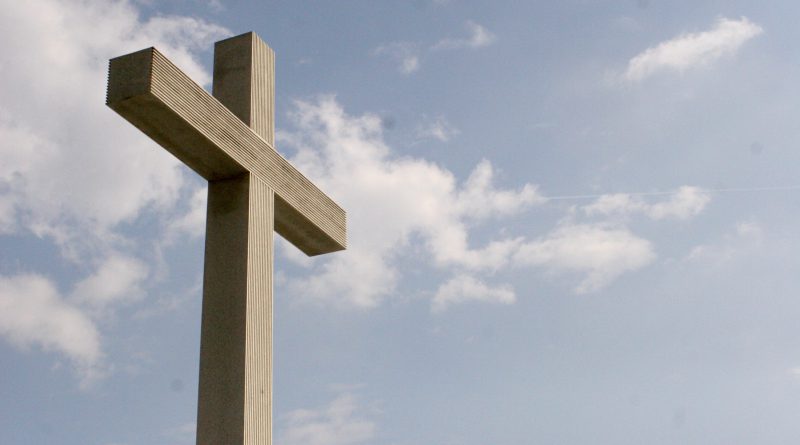 Poland is one of the most religious countries in Europe and the Catholic Church has a strong influence on society and the state. But not all are happy with how the church is trying to shape the country. The church faces a challenge when abortion is on the agenda as it risks losing female supporters.

One after one, they kneel, mark the cross with one hand and continue down the aisle looking for a free spot. Hundreds takes their seat in the grand St. Anne’s Church in the historic centre of Warsaw. The service starts. Much of the crowd are elderly and primarily female. But there are still several young people. Crowds keep on entering the church and along comes a blind man. He is helped onto a seat, where he can listen to the priest’s words, prayers and singing, where seemingly everyone joins in to be his choir.

Listen to the Church service in St. Anne’s Church in Warsaw while reading

It’s a gripping experience, but a common one. There are some 25 Catholic churches in Warsaw, and a whopping 10,000 parishes in Poland. The country is one of the most religious in Europe, and estimates say around 90 per cent of the Polish population are Catholics. And with the election of the conservative Law and Justice party, which aims to return the country to its traditional Polish values and Catholic roots, the Church has a central position and influence.

But not everyone is happy with this.

“They have too much influence,” says Krystyna Kacpura, Executive Director of the Federation for Women and Family Planning.

“They want to create political careers of persons. They want politicians to feel that their career depends on the church, because if they change stance on abortion, LGBT-issues or on traditional family, this will be announced during Sunday masses. ‘Please don’t vote on this person’,” she criticizes.

Kacpura went with many others on the streets in October last year to stop a bill that was supported by the government – and had strong ties to the powerful Catholic Church.

A black day for the church

Krystyna Kacpura’s strong criticism is based on of a proposed stricter abortion-law, which resulted in massive demonstrations across Poland last year. Not unlike ants storming out of their colony, when they’ve been threatened, Polish women (and men) took to the streets all over the country to defend the right to their body, dressed in black. Hence the day was labelled ‘Black Monday’. Reportedly 30.000 demonstrated on the Castle Square in Warsaw, right next to St. Anne’s Church.

Poland already has one of the strictest abortion laws in Europe, where abortion is only legal in case of rape, when the woman’s life is in jeopardy, or if the fetus is irreparably damaged. The proposed law would make any abortion illegal.

“We expected that (PiS) will have to pay for election to the church and their supporters from extremist and fundamentalist catholic groups. We expected this. But we didn’t expect such horrible law. We didn’t expect that they want to give this real threat to the life and health of Polish women.”

It was for the first time one party had a majority solely, which gave Law and Justice wide-ranging power. But they’re not the only ones in power according to Kacpura.

“The Catholic Church in Poland is strongly engaged in political life. Politicians – and especially right-wing politicians – believe that their political career depend on the church. This is the reason why they are afraid.”

This has put PiS in between a rock and hard place.

According to POLITICO, an unnamed PiS official told a Polish newspaper: “We’re trapped between the pressure from the Catholic Church and a real anger of women and the young in general.”

Watch the link between religious belief and voter behaviour here. On the left, the percentage of people who stated they “believe” or “very deeply believe”. On the right, overview of how Poles voted in the Presidential election between winner Andrejsz Duda (Law and Justice) and now former president Bronisław Komorowski (Civic Platform)

One of the reasons that Poland has such a strong connection to the Catholic Church harkens back to the days under communist regime. Until 1989, Poland was dominated by the Soviet Union, who tried hard to keep Polish traditional values on hold. Here, the church provided a sanctuary for Poles and was even described as something like a “substituted Polish state”.

Even though Poland is a secular state, the Church has a great political power after the breakdown of communist control.

“After 1989, I would say that the catholic vision was almost the only game in town. Even the secular left acknowledged the Catholic Church’s role toppling down the communist regime and fighting for human rights,” says Łuczewski

It is difficult to say, whether the Catholic Church has gained more power, as Poland chose the more conservative Law and Justice party, he explains.

“It’s hard to say, because when you say ‘The Catholic Church’, it’s not only the institution, it’s more than half the population (who are catholic), so politicians have to take this into consideration,” says Łuczewski.

“The separation of the church and the state is constructed,” Łuczewski says. “Religion is everywhere.”

It is impossible not to notice how religion has shaped the country when driving through Poland. References to the former pope, John Paul II, is also seen multiple places and he was labeled as the greatest national hero by former PM Donald Tusk. And if you gaze over any Polish city, the tallest point in the city will most likely be a cross on top of a church – only beaten by capitalist skyscrapers and communist monuments in the biggest cities.

It was a Catholic organization Ordo Iuris who initiated the abortion bill. In Poland, it is possible to force the Parliament to consider a citizens proposal, if they can amend more than 100,000 signatures. Ordo Iuris collected more than 450,000. The signatures was delivered in 35 boxes, which together showed a pictures of a fetus and the text “stop abortion”.

“We want to change the law and those barbarous procedures that do not belong in the 21st century,” said attorney Jerzy Kwaśniewski, one of the authors of the ban, when he delivered the signatures July last year.

And many churches backed this message. Almost a year after, it is still possible to find pro-life posters and fliers in the church. For instance, in the Church of St. Joseph in Krakow, a series of nine pro-life posters about hang in a half circle close to the alter.

Watch the nine posters in Church of St. Joseph here

While the ‘Black Monday’ demonstrations went on, a counter movement called ‘The White Protest’ reportedly attracted “thousands”, according to LifeSiteNews.com. Special Masses for the abortion ban were celebrated the same day as well. In addition to it all, Polish public television chose to screen an anti-abortion movie called “Eugenics” the same night as the protests. 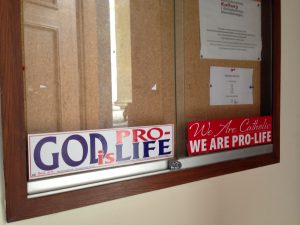 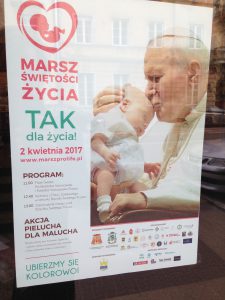 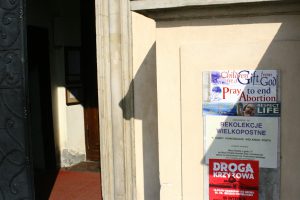 Many churches feature different anti-abortion messages. A CBOS poll from 2014 found that 69% of Poles view abortion as immoral and unacceptable, but this view has been changing with the ‘Black Monday’ demonstrations.

The abortion-bill and the subsequent protests caught the eyes of the West. Many were critical towards the conservative and religious path Poland was on, but the painting of Poland is too black and white in a grey world, 23-year old catholic Mateusz feels.

Mateusz is one of more than 70 per cent of Poles, who stated that religion is of ‘high’ or ‘very high importance’. Mateusz is a part of a Catholic community that do volunteer work and help students with scholarships. For Mateusz, religion binds the polish people together and creates a notion of community. The connection between the state and the church comes natural for Mateusz.

“I think it’s not possible to divide the religion and the country and state totally. Our law is based on this cultural tradition and morality,” Mateusz says.

And a strict abortion law in Western eyes isn’t necessarily seen the same way in Poland.

“We are a Catholic country so it’s not strict. It’s natural. For catholic people as me, it’s not good to decide yourself, what is going to happen with the other person and we believe that the life is precious,” Mateusz says.

Visit the Holy Cross Church in Warsaw, one of the most notable Baroque churches in Warsaw. During the Warsaw Uprising in 1944, the Church was damaged and later was destroyed by the Germans by bombings in 1944 and 1945. The church was rebuild in a simplified form in between 1945 and 1953.

Despite the historic influence in Poland and apparent surge under Law and Justice government, the Catholic Church faces a demographic battle to hold on to this power.

“The percentage in church attendance – especially among the youth – is diminishing. It’s not a crisis for the Catholic Church, but for sure a challenge,” Michał Łuczewski says.

In 2014, the Telegraph could report that the number among church attendances had fallen by around two million over the last 10 years.

“It’s still one of the strongest institutions in Poland. But it’s not the best time for the Catholic Church in Poland.”

On the political scene, the failure of the abortion bill came as a disappointment.

For Krystyna Kacpura this was of course a success. She says the bishops changed their position from support of the bill to disapproval of it as women started leaving church masses and instead protesting outside of it. The church was afraid of losing faithfuls. Instead they made it clear, that the ones that had prepared the law weren’t real Catholics, Kacpura tells. The Church was still against abortion, but didn’t want to criminalize women. Kacpura still ponders on the role, the Church played.

“When this draconian law was sent to further procedure to parliamentary commissions, it was said by some bishops that ‘we’ll take care of this of we’ll have a look at this law’. They’re not politicians. Why do they want to be engaged in formulating the laws?” asks Kacpura.

But because of the backlash from women, the Church changed its position. And Kacpura believes the Church now is silent on the matter, because they know that they need to regain their support. The Polish women won.