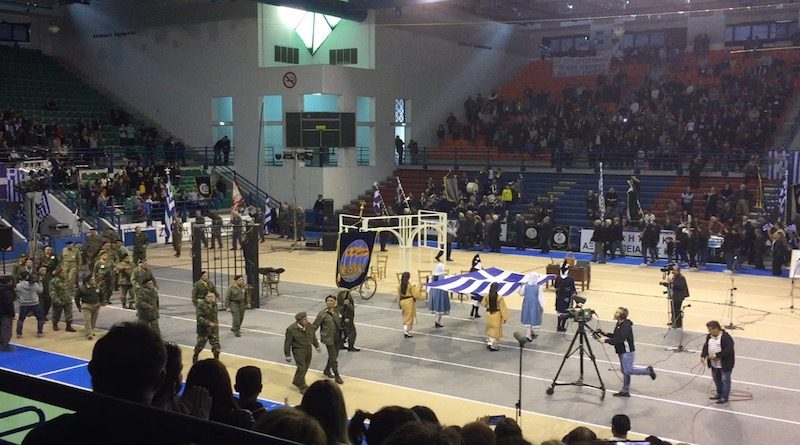 The celebration of national days emphasizes nationalism and brings the division of the country more into the spotlight.

They are wearing army coloured clothes, black berets and you can see the elderly years in most of the diffracted backs.  Despite this they shine with the honour and pride of their country while carrying their national flag. Every year on the 1st of April, the start of the movement against the British occupation rule and the eventual independence in 1960 is celebrated by Greek Cypriots.

While the veterans carry their Greek Cypriot flag and the orchestra plays the national anthem, it is clear as daylight that this day also emphasizes the Greek Cypriot identity and culture. In this way the celebration of national days makes the divide in Cyprus extra visible and thereby it could be a stumbling block in the reunification of the island nowadays.

The video below gives an impression of the national celebration of the EOKA.

The feeling these days bring along

Influence of national days on the reunification talks

Board Press Officer Evren Inançoğlu, who is member of several bi-communal committees concerning the reunification, explains how the crisis between the two leaders came to this point. “The crisis between the two leaders was not created by the celebration of the EOKA, but by something very similar, the celebration of the Enosis. The EOKA is the association; the idea of Enosis was once strongly supported by this organization.”

Inançoğlu also said that both parts of the island already celebrated their own national days and that in the beginning of the reunification talk nobody really cared about these days.

After the Turkish Cypriot elections last year, people from both sides had high hopes and thought of a new momentum and that this would be the right time for the reunification. According to Inançoğlu and the Turkish perspective, the new Turkish Cypriot President took the initiative to start with the talks. For a while the talks went well and people were positive and thought that the reunification would be settled and done by the end of 2016. Separate from some other minor issues, the Greek Cypriot Parliament passed a law that there should be another extra commemoration for Enosis.

The Greek Cypriots however, shocked, angered and surprised the Turkish Cypriots by passing this law. When this law passed the Greek Cypriot Parliament it blew the idea of the reunification and all time and effort seemed to be wrecked for months.

Inançoğlu explained that the Turkish Cypriot leader got furious and emphasized how they are trying to negotiate, find a solution to the problem, how they are speaking about confidence building measures and that accepting this law is against that. This is the point where the negotiation talks turned into a crisis and where the talks were suspended.

Nevertheless, according to news website ‘UN Cyprus Talks’ and ‘Cyprus Mail’, the two leaders are currently talking again, after a two months break.

The importance of the celebration

Chairman of the “Council of Historical Memory of EOKA’s Struggle 1955-1959”, Andreas Maïmarides, explains that the celebration on the 1st of April is still important to remember because of the national character of the culture of Greece (Hellenism). “People today remain faithful to these roots of language and religion. This triggered thousands of deaths of people who fought against the conquerors who were present in Cyprus.” Maïmarides also adds that the celebration of the anniversary of EOKA connects the past with the future of Hellenism and commits the moral support of the Greek people to remain throughout the centuries, just like their grandparents before them.

The fact that this national celebration is high on the list of importance, is also emphasized by the attendance of President Nicos Anastasiades, the leader of the Republic of Cyprus and many other officials.

One could consider the celebration on the 1st of April as controversial. Economist and social scientist, George Koumoullis, wrote in the Cyprus Mail: “The celebration constitutes a paradox to christen the struggle for the union with Greece as a struggle for “liberation”. Koumoullis words describe that if the Greek Cypriots wanted freedom, it would be rather ambivalent to unify with Greece. This because in Greece there was no freedom of speech, thought, expression or action for the reason that dictatorial or fascist governments ruled the country most of that time.

Nowadays when nationalism rises, it often includes the celebration of national days, it emphasizes the countries’ own culture, language, anthem and history. In Cyprus both parts of the island (North: Turkish Cypriots, South: Greek Cypriots) see this phenomenon but different from each other.

This also means that in schools the history and the story of what happened in Cyprus, is told differently in both parts of the island. According to Political Science and International relations Doctor, Umut Bozkurt education systems were very nationalistic. “Interestingly, teachers in the South used to be more conservative, so they opposed a kind of education reform in 2009. This would mean that school and educators would not use real nationalistic texts anymore. Because of the nationalistic way of educating, some people on either side base their opinion on how they received the historical stories they learned.”

That doesn’t mean that in school children learn to think badly about the other side, but there often is the underlying tone. During the celebration of the EOKA, there was a scene in a historic play of how the British tortured the Greek Cypriots during the EOKA struggle. There was nothing badly said about the Turkish Cypriots, but according to Andreas Maïmarides: “Unfortunately the Turkish Cypriots were working together with the British, because as they believed that they were employed by the British forces.”

Background of the separation

The separation of the island nowadays finds her origin in a pattern, which was invented and set up by the British. Politics and International Studies Doctor, Zenonas Tziarras, argues that through the policy of divide and rule the British managed to separate the two communities of the island of Cyprus. In those days the two population of the island were called the Muslim and the Christian Cypriots and not the Greek and Turkish Cypriots.

Also advocate Renos Lyssiotis, who was strongly involved in the EOKA struggle as leader of the youth group in Nicosia, said that it was the British who separated the island during the struggle for independence. “We can live together; the Turkish Cypriots and the Greek Cypriots as we lived together before, but the British separated us. This because when they found out that they couldn’t win over the EOKA, they solved the issue by dividing the island between the two societies.

If the celebration of national days makes the divide of the island of Cyprus extra visible, wouldn’t it help not to celebrate these kinds of days anymore?

“No” Said Andreas Maïmarides. “For us it is important to remember where we are from and that we stay here. I’m sure that if we don’t celebrate this day anymore that we soon as Greek Cypriots will disappear. Our parents and grandparents stayed here for so many years and we have to keep that going.”

Renos Lyssiotis claps his hands enthusiastically for the EOKA veterans who survived the struggle as they pass by, with the Greek Cypriot national flag. He thinks that not giving these days attention will not be the solution. “It’s not an option not to celebrate national days anymore. We cannot stop being Greek Cypriots and they cannot stop being Turkish Cypriots as well as, we can’t forget that you are Christian or Muslim, but we can live together and maybe one day, we can make a national day together for all Cypriots.”